Grant of paid holiday to the employees on the day of poll under Section 135 B of the Representation of the People Act, 1951

Kiran Kumari 0 April 15, 2019 1:39 am
Grant of paid holiday to the employees on the day of poll under Section 135 B of the Representation of the People Act, 1951
By Speed post/camp bag
ELECTION COMMISSION OF INDIA
NIRVACHAN SADAN, ASHOKA ROAD, NEW DELHI-110001.
No.78/2019/EPS
Dated : 22nd March, 2019
To
1. The Chief Secretaries of
All States and Union Territories.
2. The Chief Electoral Officers of
All States and Union Territories
3. The Secretary to the Govt. of India, M/o Personnel Public Grievances & Pensions, Department of Personnel and Training, North Block, New Delhi.

Sub : General Elections to Lok Sabha, 2019 and General Election to the Legislative Assemblies of Andhra Pradesh, Arunachal Pradesh, Odisha & Sikkim and Bye-elections to fill the clear vacancies in Assembly Constituencies of various States – Grant of Paid Holiday – regarding

I am directed to invite your attention to Section 135 B of the Representation of the People Act, 1951 which provides for the grant of paid holiday to the employees on the day of poll. The Section 135B is reproduced below:-

“135B. Grant of paid holiday to employees on the day of poll

(i) Every person employed in any business trade, industrial undertaking or any other establishment and entitled to vote at election to the House of the People or the Legislative Assembly of a State shall, on the day of poll, be granted a holiday.
(ii) No deduction or abatement of the wages of any such person shall be made on account of a holiday having been granted in accordance with sub-section (1) and if such person is employed on the basis that he would not ordinarily receive wages for such a day, he shall nonetheless be paid for such day the wages he would have drawn had not a holiday been granted to him on that day.
(iii) If an employer contravenes the provisions of sub-section (1) or sub-section (2), then such employer shall be punishable with fine, which may extend to five hundred rupees.
(iv) This section shall not apply to any elector whose absence may cause danger or substantial loss in respect of the employment in which he is engaged.”
2. The above provisions require that all establishments and shops including those which work on shift basis shall be closed on the day of poll in the Constituency where a General/bye-election is to be held. However, there may be cases where a person is ordinarily resident of the Constituency and registered as an elector, may be serving/employed in an industrial undertaking or an establishment located outside the constituency having a general/bye-election. It is clarified that in such a situation, even those electors including casual workers working outside the constituency concerned would be entitled to the benefit of a paid holiday extended under Section 135B(1) of the Representation of the People Act, 1951.

3. The daily wage/causal workers are also entitled for a holiday and wages on poll day as provided in Section 135B of the R.P. Act, 1951:
4. The Commission desires that suitable instructions should be issued to all concerned for the phase-wise election schedules, as mentioned in the Commission’s Notifications under endorsement to the Commission for information and record.
5. The receipt of this letter may please be acknowledged.
Yours faithfully,
(SANJEEV KUMAR PRASAD)
UNDER SECRETARY
Read also: Grant of Compensatory leave for performance of Election duty during Saturday/Sunday/holidays 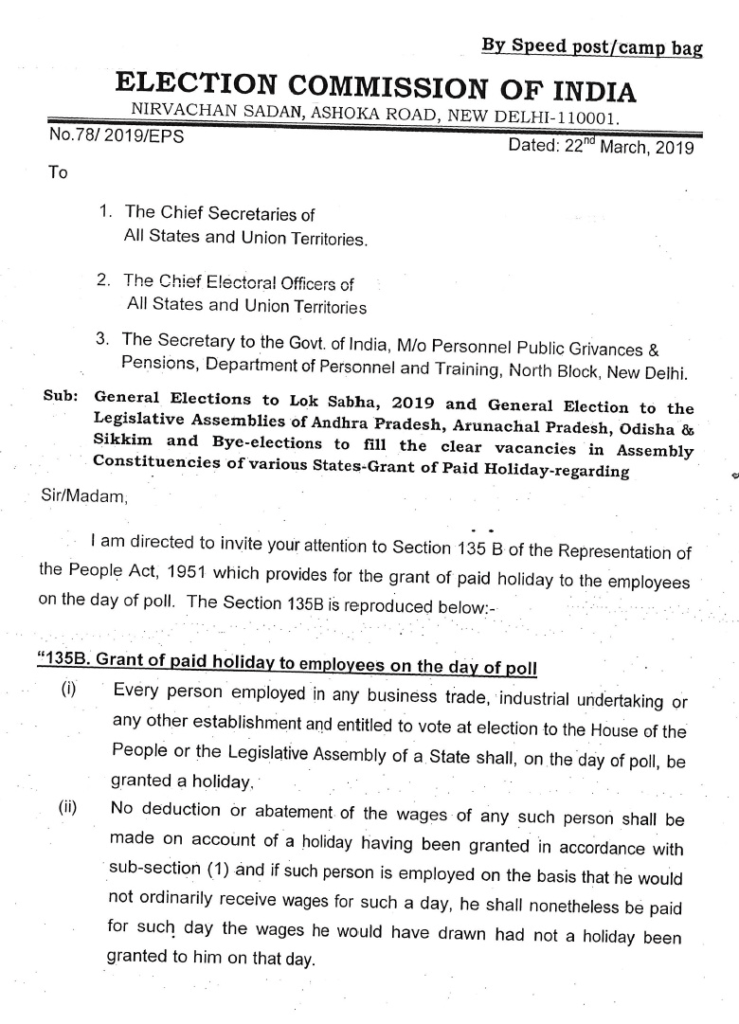 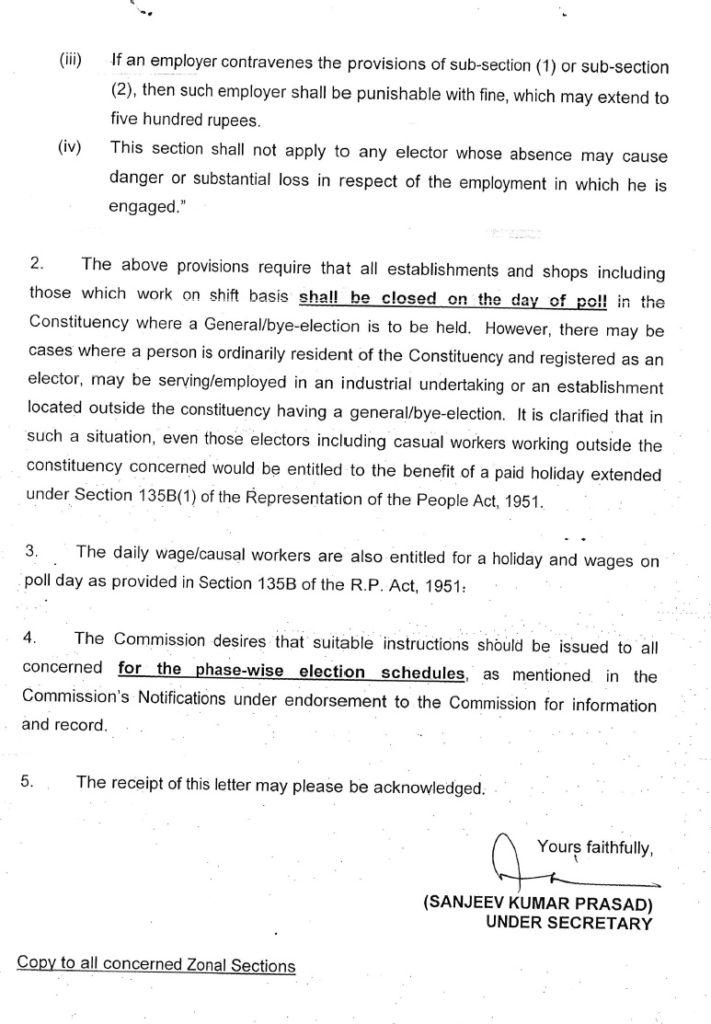