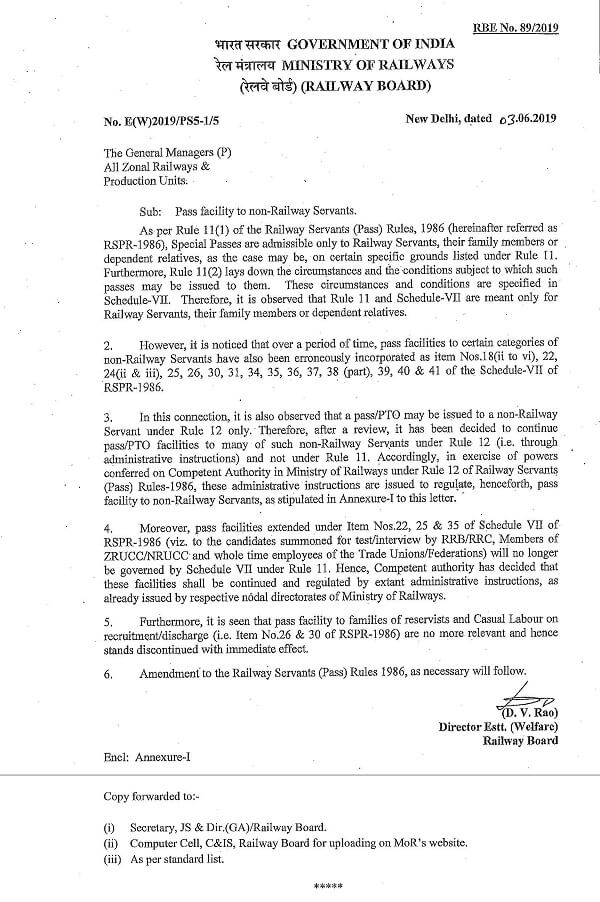 As per Rule 11(1) of the Railway Servants (Pass) Rules, 1986 (hereinafter referred as RSPR-1986), Special Passes are admissible only to Railway Servants, their family members or dependent relatives, as the case may be, on certain specific gro1mds listed under Rule 11. Furthermore, Rule 11(2) lays down the circumstances and the ·conditions subject to which such passes may be issued to them. These circumstances and conditions are specified in Schedule-VII. Therefore, it is observed that Rule 11 and Schedule-VII are meant only for Railway Servants, their family members or dependent relatives.
2. However, it is noticed that over a period of time, pass facilities to certain categories of non-Railway Servants have also been erroneously incorporated as item Nos.18(ii to vi), 22, 24(ii & iii), 25, 26, 30, 31, 34, 35, 36, 37, 38 (part), 39, 40 & 41 of the Schedule-VII of RSPR-1986.
3. In this connection, it is also observed that a pass/PTO may be issued to a non-Railway Servant under Rule 12 only.· Therefore, after a review, it has been decided to continue pass/PTO facilities to many of such non-Railway Servants under Rule 12 (i.e. through administrative instructions) and not under Rule 11. Accordingly, in exercise of powers conferred on Competent Authority in Ministry of Railways under Rule 12 of Railway Servants (Pass) Rules-1986, these administrative instructions are issued to regulate, henceforth, pass facility to non-Railway Servants, as stipulated in Annexure-I to this letter. ·
4. Moreover, pass facilities extended under Item Nos.22, 25 & 35 of Schedule VII of RSPR-1986 (viz. to the candidates summoned for test/interview by RRB/RRC, Members of ZRUCC/NRUCC and whole time employees of the Trade Unions/Federations) will no longer be governed by Schedule VII under Rule 11. Hence, Competent authority has decided that these facilities shall be continued and regulated by extant administrative instructions, as already issued by respective nodal directorates of Ministry of Railways.
5. Furthermore, it is seen that pass facility to families of reservists and Casual Labour on recruitment/discharge (i.e. Item No.26 & 30 of RSPR-1986) are no more relevant and hence stands discontinued with immediate effect.

6. Amendment to the Railway Servants (Pass) Rules 1986, as necessary will follow.

(i) Secretary, JS & Dir.(GA)/Railway Board.
(ii) Computer Cell, C&IS, Railway Board for uploading on MoR’s website.
(iii) As per standard list. 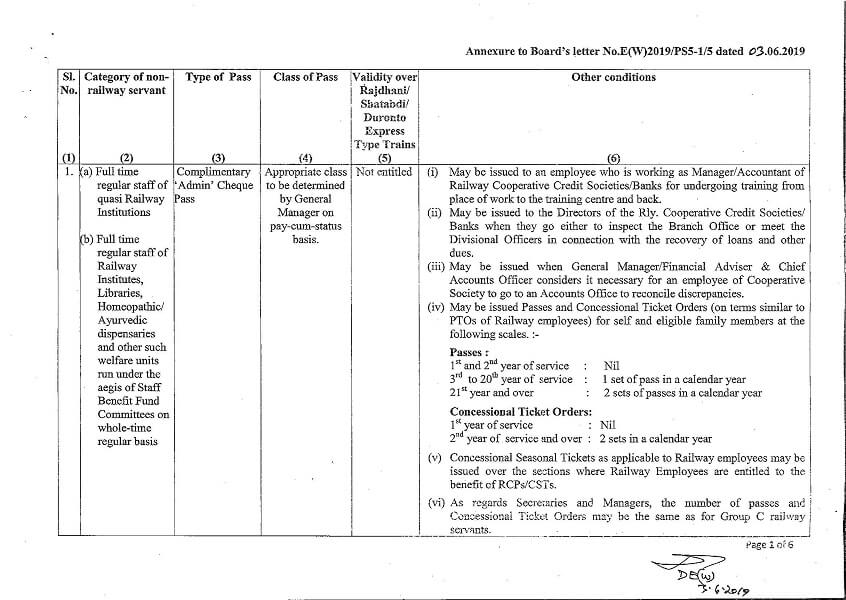 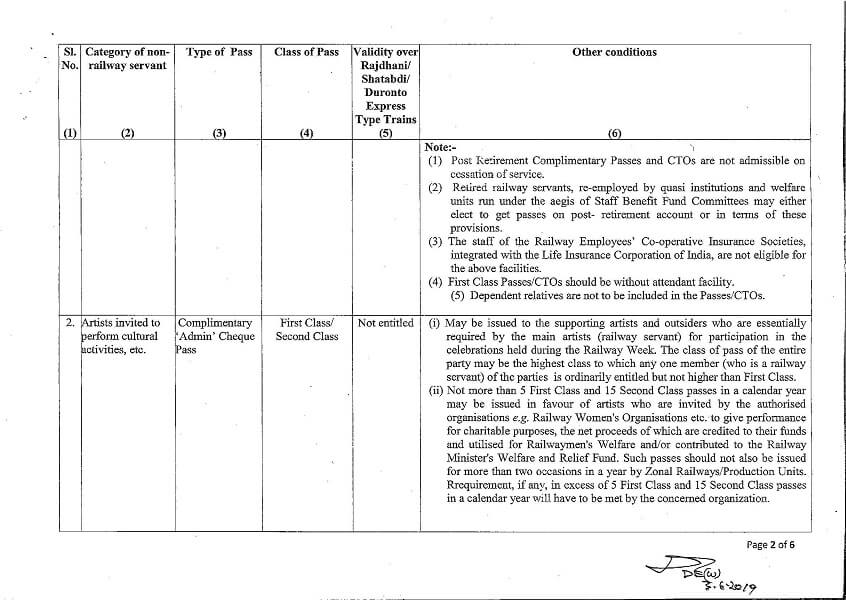 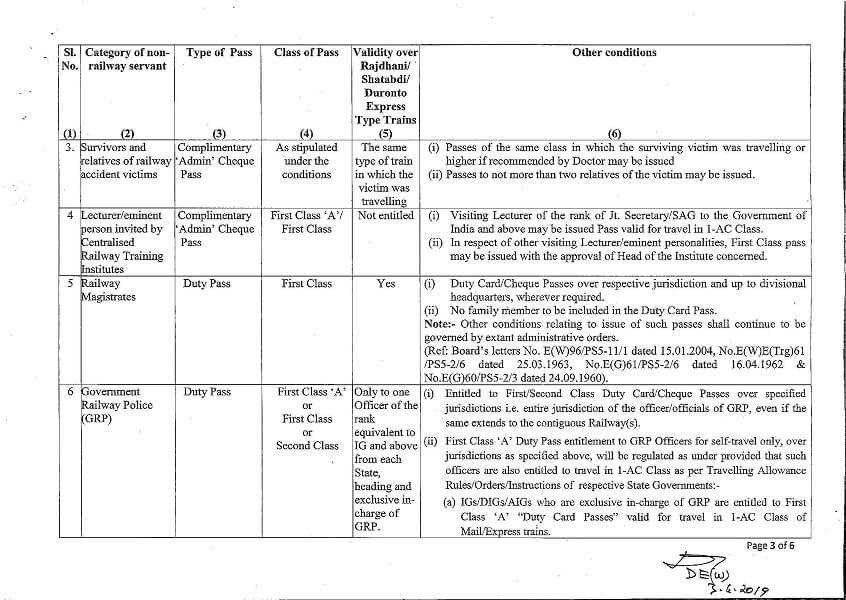 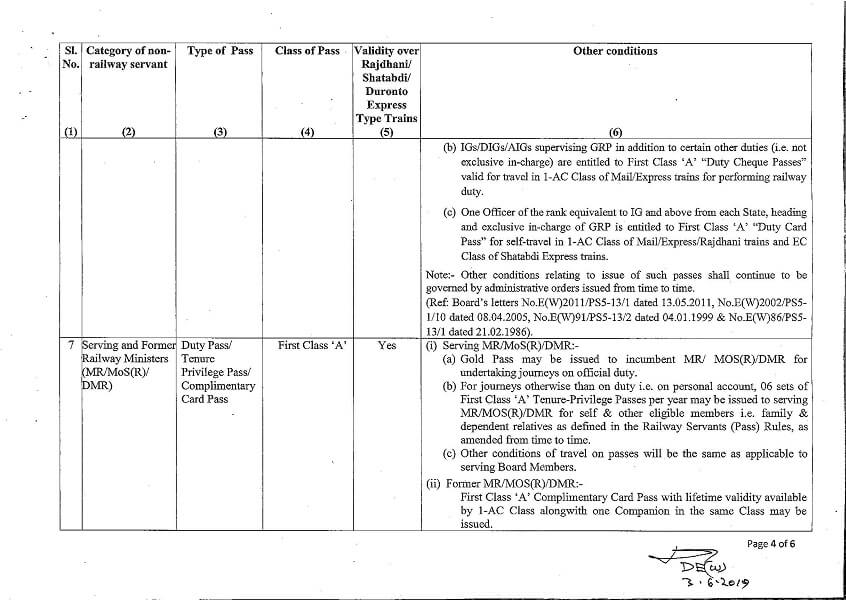 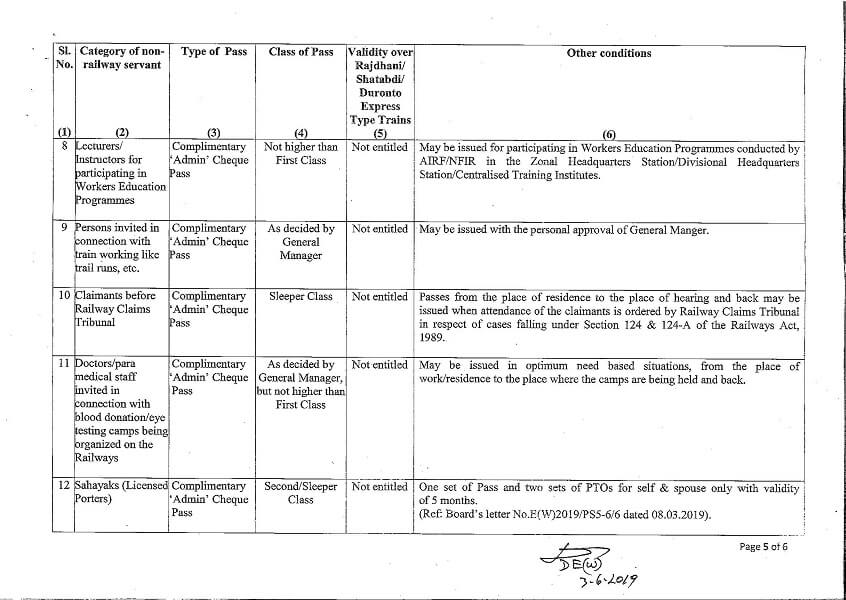 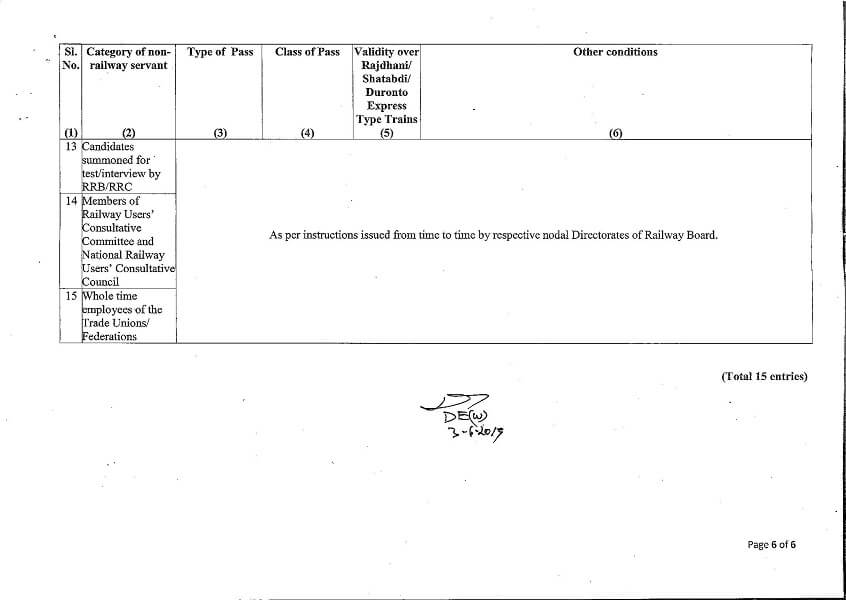