The undersigned is directed to say that instructions on the procedure to be followed for Resignation from Service have been provided vide Ministry of Home Affairs O.M.No.39/6/57-Ests.(A) dated 06.05.1958, Department of Personnel & Training (DoPT) O.M.No.28034/25/87-Estt(A) dated 11.02.1988, No.28034/4/94-Estt.(A) dated 31.05.1994 and No.28035/2/2007-Estt.(A) dated 04.02.2007. Para 5 of DoPT O.M. dated 11.02.1988 referred to above, provides the procedure for withdrawal of resignation as governed by Rule 26 (4) to (6) of Central Civil Services (Pension) Rules, 1972. References are being received from Ministries/Departments on the request for withdrawal of resignation by Government servants appointed after 31.12.2003 and for whom CCS(Pension) Rules are not applicable. The matter of withdrawal of resignation of Government servants of Central Civil Services/Posts, appointed after 31.12.2003 who are covered under the National Pension System (NPS) and for whom CCS (Pension) Rules, 1972 is not applicable has been considered in this Department and with the approval of the competent authority, it has been decided that the following guidelines/instructions may be followed while considering the request for withdrawal of resignation of the aforesaid Government Servants.
2. The appointing authority may permit a person to withdraw his resignation in the public interest on the following conditions, namely:

(a) that the resignation was tendered by the Government Servant for some compelling reasons which did not involve any reflection on his integrity. efficiency, or conduct and the request for withdrawal of the resignation has been made as a result of a material change in the circumstances which originally compelled him to tender the resignation.

(b) that during the period intervening between the date on which the resignation became effective and the date from which the request for withdrawal was made, the conduct of the person concerned was in no way improper;

(d) that the post, which was vacated by the Government servant on the acceptance of his resignation or any other comparable post, is available.

3. Request for withdrawal of a resignation shall not be accepted by the appointing authority where a Government Servant resigns his service or post with a view to taking up an appointment in or under a private commercial company or in or under a corporation or company wholly or substantially owned or controlled by the Government or in or under a body controlled or financed by the Government.
4. when an order is passed by the appointing authority allowing a person to withdraw his resignation and to resume duty, the order shall be deemed to include the con donation of interruption in service for the purpose.
5. No withdrawal from NPS corpus shall be permissible within a period of 90 days from the date on which the resignation becomes effective. i.e the resignation is accepted by the competent authority and the Government servant is relieved of his duties. However, the aforesaid condition shall not be applicable in case of death of the government servant after the resignation becomes effective.
6.The provision for withdrawal of resignation shall not be applicable for temporary Government Servants.
7. Above guidelines/instructions will be applicable only for the Government Servants appointed on central civil service/posts after 31.12.2003 who are covered under the National Pension System (NPS) and for whom CCS (Pension) Rules,1972 is not applicable. Further, these guidelines/instructions will be applicable till the time the statutory rules regarding withdrawal of resignation for such Government Servants are notified.
8. This O.M. shall be prospective and cases already settled shall not be opened.
9. this issues in consultation with the office of comptroller and Auditor general of India.
10. It is requested to bring it to the notice of all concerned for strict compliance.
(Kaabindra Joshi)
Director 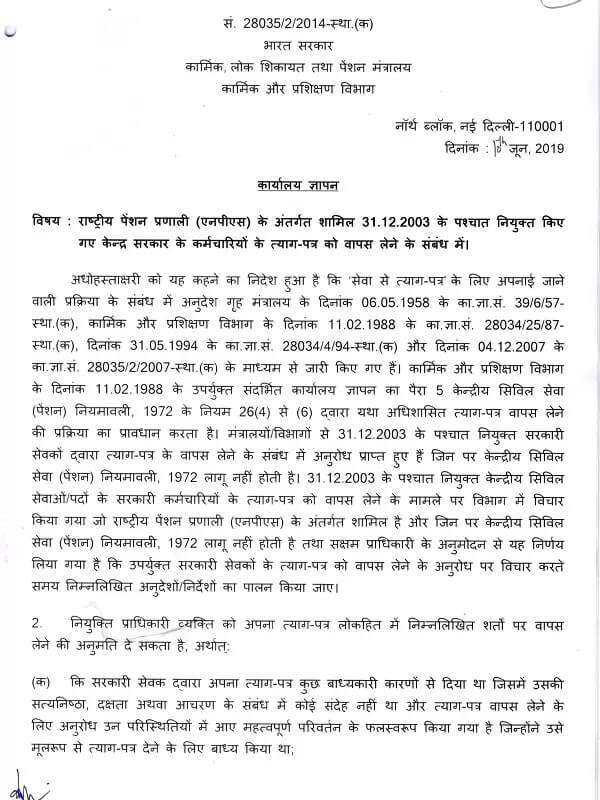 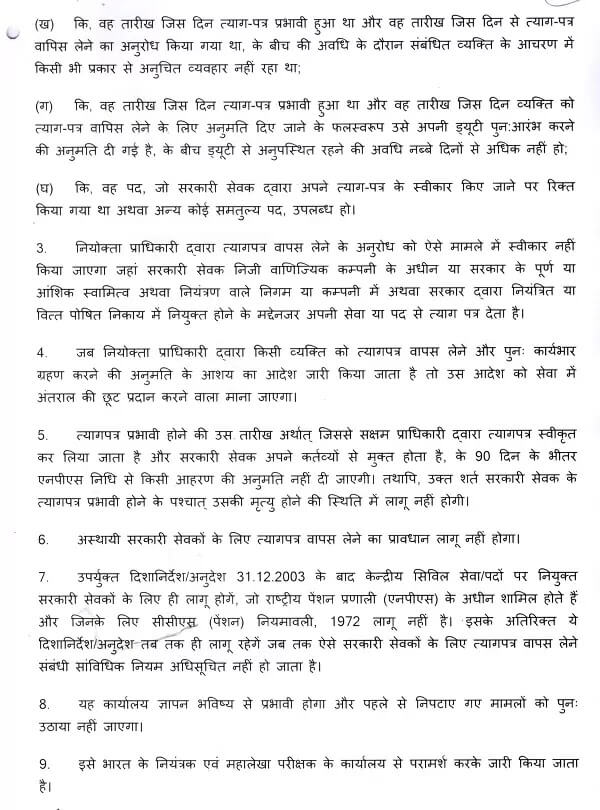 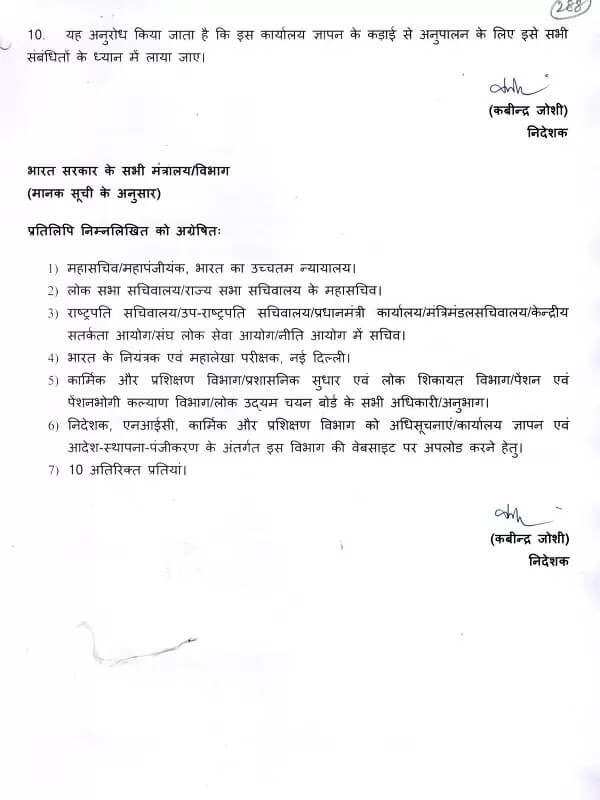