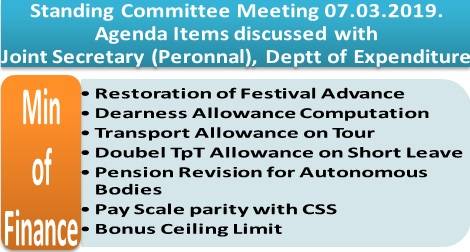 (xxii) Item No 10: Restoration of Interest Free Advances, withdrawn by the Government based on 7th CPC Recommendations :
Joint Secretary (Personnel) stated that Seventh Pay Commission in its report had recommended that all interest free advances should be abolished. The recommendations of the Commission relating to the abolition of interest free advances have been accepted by the Government with the exception of interest free Advances for Medical Treatment and Travelling Allowance for the family of the deceased. Travelling Allowance on tour or on transfer and Leave Travel Concessions have also been retained.
Staff Side also raised the demand for the restoring Festival Advance. Joint Secretary (Personnel) agreed to reconsider the issue of restoring the Festival Advance.
Staff Side thanked JS (Pers.) for agreeing to reconsider the issue of restoration of Festival Advance to the Central Govt. Employees.
(xxiii) Item No. 19 : Dispense with the practice of ignoring the fraction while computing Dearness Allowance :
Joint Secretary (Personnel) stated that the present formula for calculation of DA where the whole numbers with fraction carried forward while calculating the percentage increase in DA was/is based on the recommendation of the 4th CPC. This method also saves the Government expenditure.
Secretary Staff raised his objection stating that the employee losses his benefit, when the fraction is ignored and carried forward. Therefore it is requested that Dearness Allowance should be paid on the actual DA raise, since DA is to compensate the inflation/price rise.
Joint Secretary (Personnel) though agreed to re-examine the matter, also informed that this may have financial implications and may increase Government expenditure.
(xxiv) Item No. 21 : Removal of conditions of being at the CHQ for few days in a month to claim the Transport allowance :
Joint Secretary (Personnel) stated that the Transport Allowance is granted for full month, even if an employee attend office for one day in a calendar month. However, when an employee remains away from Headquarters for full calendar month(s) on duty / tour, he does not get any Transport Allowance. Since the employee has no occasion to commute between place of duty/Headquarters and residence during such calendar month(s), grant of Transport Allowance for that calendar month(s) is not admissible and also not justified. Further, for such period when employee is sent away on duty/tour from his Headquarters to any other place, he gets adequately compensated by grant of Daily allowance for that period. As per 6th and 7th CPC recommendations, Daily allowance is being given as reimbursement for hotel accommodation, food bill and local travel charges.
Staff Side demanded that being at the CHQ for one day, as a condition may be removed similar to the removal of one kilometer condition earlier. The Staff Side further stated that if an employee is away from headquarter for training or tour in a whole calendar month he does not get Transport Allowance. This is not justified because CCA has been abolished and it is subsumed in Transport Allowance implying that the Staff losses CCA as well. The Staff Side further stated that employees, who goes on Child Care Leave also does not benefit due to this condition. They demanded that the matter should be re-examined.

(xxv) Item No.24: Transport allowance in case of Physically handicapped person at double rate and deduction of the same if one is on short leave may be dispensed with :
Joint Secretary (Personnel) stated that as per Department of Expenditure’s OM No. 21/5/2017-E.II(B) dated 07.07.2017, Transport Allowance at double the normal rates is admissible to Physically disabled employees, viz. Visually impaired, orthopedically handicapped, deaf and dumb/hearing impaired and also to employees suffering from spinal deformity. Otherwise, the general conditions for drawal of Transport Allowance at normal rates apply equally to all Govt. employees. Hence, Transport Allowance at double the normal rates will not be admissible for the calendar months (s) wholly covered by leave for persons with disabilities. In this regard, the Department of Expenditure has not issued any other instructions. He further stated that there are no instructions with regard to having attendants for handicapped employees and if there is any such instances then that should be brought to the notice of Department of Expenditure. The Staff Side agreed to this suggestions.
(xxvi) Item No. 26 : Extension of benefits of revised pension rules – 2016 in respect of pensioners of Central Government employees in autonomous bodies :
Joint Secretary (Personnel): stated that Department of Expenditure has issued orders only for Central Government Employees and not in respect of employees belonging to autonomous bodies. In case of Dearness Allowance the orders are issued by administrative Ministries/Departments.
Secretary (Staff Side) pointed out that the employees of autonomous bodies were getting pay scales of Central Government; the problem arose when the Department of Expenditure imposed the condition that 25% of the expenditure will be borne by the administrative Ministries/Department. It is imperative that these Central Government employees in autonomous bodies should be kept on equal footing with Central Govt. employees for the purpose of pay scales and pension.
Joint Secretary (Personnel) stated that there are as many as 680 autonomous bodies where Central Government employees are working and if this demand is accepted the repercussion will be huge. Joint Secretary (Personnel) stated that the Staff Side may keep this demand as a separate issue.)
(xxvii) Item No. 27 & Item No. 38 : Parity in pay scale of all stenographers, assistants and Ministerial staffs in subordinate offices and in IA&AD and organized accounts cadre with Central Secretariat staffs by upgrading their pay scales :
Joint Secretary (Personnel) stated that in cases where 7th CPC has recommended downgrading of pay scales of Assistants and Section Officers of CSS, Assistant Nursing Superintendent etc., the Government after considering the recommendations of the Commission decided that those recommendations related to down-grading of posts may not be accepted and normal replacement may have to be allowed in such cases. He further said that a committee has been formed by Department of Personnel & Training to examine the matter.
Staff Side reiterated that considering the nature of the job of Stenographers or Assistants, the Ministerial Staffs of subordinate offices and Central Secretariat are the same. It is justified that pay parity is maintained
while considering the matter related to pay scale. The staff side also demanded that the Committee constituted for this purpose may consult the Staff side also before finalizing its recommendation.
(xxviii) Item No.29: Enhancement of Bonus Ceiling Limit of Casual Labourers, consequent on enhancement of bonus calculation ceiling of Central Govt. Employees :
Joint Secretary (Personnel) informed that the details have been sought from different Ministries/Departments mainly from Ministry of Defence, M/o Labour, M/o Housing & Urban Affairs etc. and the information is awaited. Once the information is received from these Ministries, the rates of bonus will be enhanced, accordingly. The item has been considered closed.