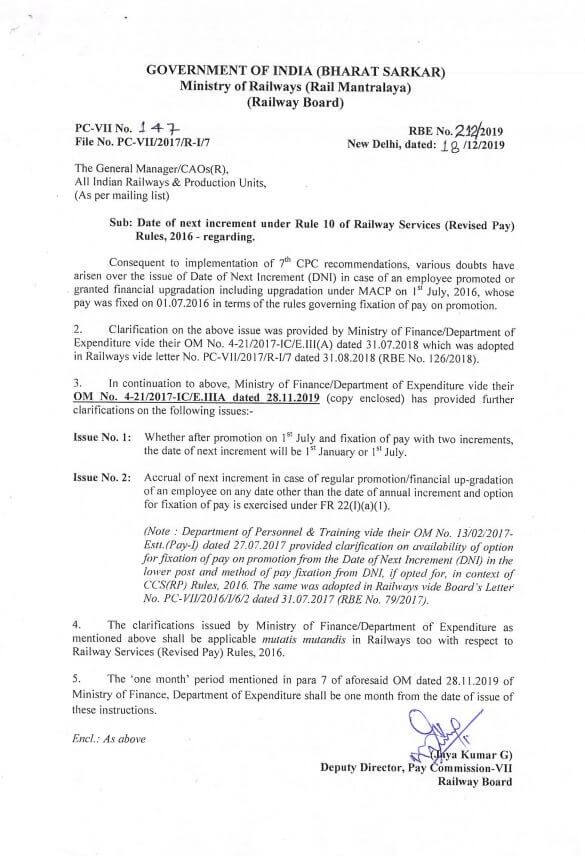 Sub: Date of next increment under Rule 10 of Railway Services (Revised Pay) Rules, 2016 – regarding.

Consequent to implementation of 7th CPC recommendations, various doubts have arisen over the issue of Date of Next Increment (DNI) in case of an employee promoted or granted financial upgradation including upgradation under MACP on 1st July, 2016, whose pay was fixed on 01.07.2016 in terms of the rules governing fixation of pay on promotion.

3. In continuation to above, Ministry of Finance/Department of Expenditure vide their OM No. 4-21/2017-IC/E .IIIA dated 28.11.2019 (copy enclosed) has provided further clarifications on the following issues:-

Issue No. 1: Whether after promotion on 1st July and fixation of pay with two increments, the date of next increment will be 1st January or 1st July.

Issue No. 2: Accrual of next increment in case of regular promotion /financial up-gradation of an employee on any date other than the date of annual increment and option for fixation of pay is exercised under FR 22(I)(a)(1).

4. The clarifications issued by Ministry of Finance/Department of Expenditure as mentioned above shall be applicable mutatis mutandis in Railways too with respect to Railway Services (Revised Pay) Rules, 2016.

5. The ‘one month’ period mentioned in para 7 of aforesaid OM dated 28.1 1.2019 of Ministry of Finance, Department of Expenditure shall be one month from the date of issue of these instructions. 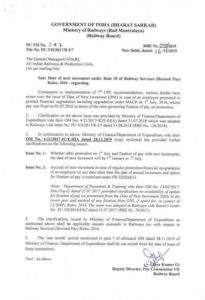