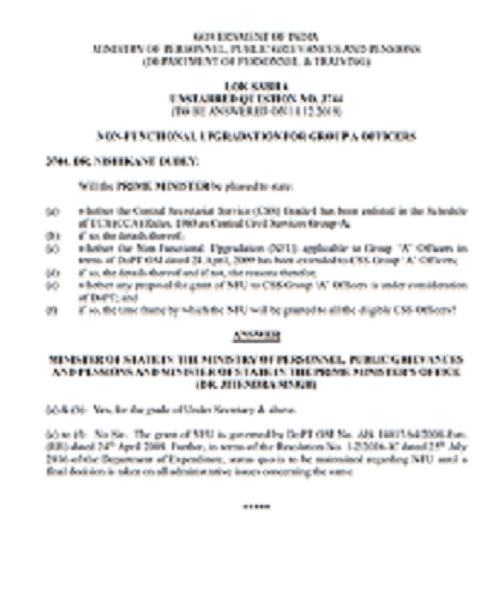 GOVERNMENT OF INDIA
MINISTRY OF PERSONNEL, PUBLIC GRIEVANCES AND PENSIONS

NON-FUNCTIONAL UPGRADATION FOR GROUP A OFFICERS

3744. DR. NISHIKANT DUBEY
Will the PRIME MINISTER be pleased to state:

(a) whether the Central Secretariat Service (CSS) Grade-I has been enlisted in the Schedule of CCS (CCA) Rules, 1965 as Central Civil Services Group-A;

(d) if so, the details thereof and if not, the reasons therefor;

(e) whether any proposal for grant of NFU to CSS Group ‘A’ Officers is under consideration of DoPT; and

(f) if so, the time frame by which the NFU will be granted to all the eligible CSS Officers?