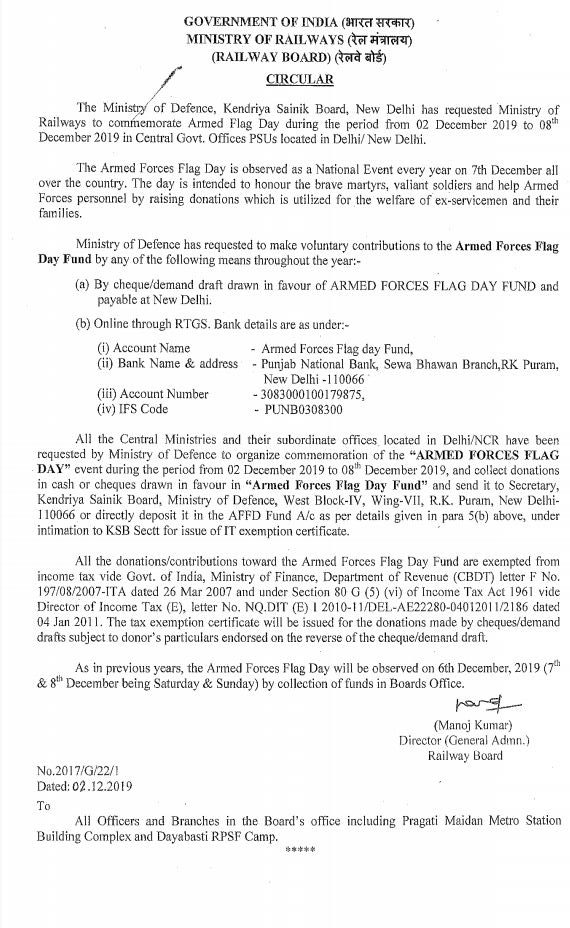 Railway Board Circular: Armed Forces Flag Day will be observed on 6th December, 2019 by collection of funds

Railway Board Circular: Armed Forces Flag Day will be observed on 6th December, 2019 by collection of funds

The Ministry of Defence, Kendriya Sainik Board, New Delhi has requested Ministry of Railways to commemorate Armed Flag Day during the period from 02 December 2019 to to 08 December 2019 in Central Govt. Offices PSUs located in Delhi/ New Delhi.

The Armed Forces Flag Day is observed as a National Event every year on 7th December all over the country. The day is intended to honour the brave martyrs, valiant soldiers and help Armed Forces personnel by raising donations which is utilized for the welfare of ex-servicemen and their families.

Ministry of Defence has requested to make voluntary contributions to the Armed Forces Flag Day Fund by any of the following means throughout the year:-

(a) By cheque/demand draft drawn in favour of ARMED FORCES FLAG DAY FUND and payable at New Delhi.

(b) Online through RTGS. Bank details are as under:-

All the Central Ministries and their subordinate offices located in Delhi/NCR have been requested by Ministry of Defence to organize commemoration of the “ARMED FORCES FLAG DAY” event during the period from 02 December 2019 to 08″ December 2019, and collect donations in cash or cheques drawn in favour in “Armed Forces Flag Day Fund” and send it to Secretary, Kendriya Sainik Board, Ministry of Defence, West Block-IV, Wing-VII, R.K&. Puram, New Delhi – 110066 or directly deposit it in the AFFD Fund A/c as per details given in para 5(b) above, under intimation to KSB Sectt for issue of IT exemption certificate.

As in previous years, the Armed Forces Flag Day will be observed on 6th December, 2019 (7th & 8″ December being Saturday & Sunday) by collection of funds in Boards Office.