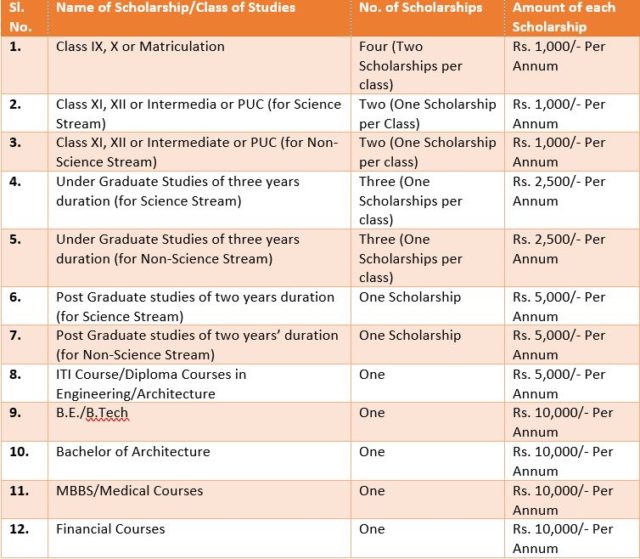 Subject: Revision of Scholarship Scheme for the Children of Non-Statutory Departmental Canteen employees out of Discretionary Fund of Director of Canteens.

The Scheme for grant of scholarship for the children of Non-Statutory Departmental Canteens, out of the funds available in the Discretionary Fund of Director of Canteens was introduced vide this Department’s O.M. No. 20/1/88- Dir. (C), dated 3.12.98 and revised O.M. No. 20.1.2011-Dir.(C), dated 2.09.2011. In suppression of this office O.M. of even number dated 2.9.2011; the amended scheme has been introduced to encourage higher studies for those children whose past performance had been meritorious. The details of the scholarships from Academic Year 2019-2020 being instituted and the considerations which will apply are given below:

The categorical details of the scholarships are as below:-

3. Awards will be given on yearly basis and every aspirant will have to meet the prescribed norms in regards to the percentage of marks in the previous year of study for being considered for grant of fresh award during the course of his/her studies. The awards will be given strictly in accordance with the principle of the highest one or next highest one (if there are more then one scholarship ) getting the Scholarship.

(a) Candidates seeking award of Scholarship should have obtained a minimum of 60% marks in the aggregate in the previous year of examination;

(b) Children belonging to SC/ST categories and Handicapped children would be given a relaxation of 10% marks in the minimum standard. 25% of the awards for school level and Under Graduate level studies (Serials (1) to (5) of para (2) will be earmarked for such candidates. However, being an award Scheme there will be no strict applications of general orders relating to SC/ST/Physically Handicapped. In the event of the earmarked awards remaining unutilised due to non-satisfaction of the minimum prescribed norms, the award will be transferred to the general category;

(c) One Scholarship will be reserved for girl child for class IX & X. Notwithstanding the prescribed minimum percentage the award will be given to those securing the highest marks. Only aggregate marks will be taken into account. However, every applicant should have obtained the minimum pass marks in all subjects;

(d) Children of only those Canteen Employees who are working in Central Govt. Offices/Establishments and who have been declared as Central Govt. employees will be eligible to apply;

(e) The Canteen employees from the Department of Telecommunications. Posts etc. which are already having separate Scholarship Scheme are to certify that their children are not already in receipt of Scholarship under the Schemes of
their Department.

4. The Scholarship will be awarded considering the performance of the candidates in the previous years of examination. In case the studies were discontinued in the previous years(s) i.e. prior to the academic year but an applicant otherwise becomes eligible for consideration, detailed justification for break in the studies during the preceding year(s) will have to be submitted. All applications will have to be submitted in the appended format only. Applications will have to be accompanied by the attested true copies of the Mark Sheets given by the recognised Institution such as School. Central/State Boards of Education/Universities. Original certificates will be submitted, if called for, for verification.

5. The individual applying for award of scholarship is required to furnish the following documents:

6. The last date for receipt of applications in the Office of Director (Canteens) will be 31°’ October, during the year 2020 and all subsequent years. . It is expected that awards will be finalised by the month of January of the following year. In no case any application received after the prescribed date will be entertained.

7. Applications will be forwarded to the office of the Director (Canteens) through concerned Head of Organization who in turn will get the same routed through the Head or the Department in the controlling Ministries/Department.

8. The awards of Scholarships will be decided by a duly designated Committee, as may be appointed from time to time. The decision taken by the Committee will be final and no representation in the matter will be entertained after awards are finalised.

9. It is requested that wide publicity of this Scheme may be given amongst all concerned.

To
All Ministries/Departments of the Govt. of India (as per standard list). (Directors/Deputy Secretaries-incharge. Administrative Division/Wing for necessary action for further dissemination to all concerned establishments under them all over India.