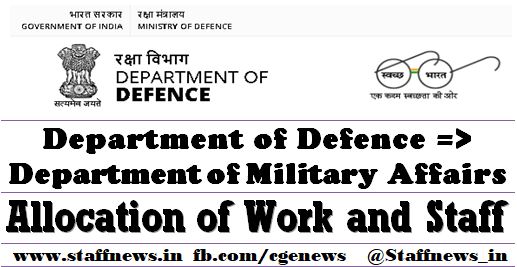 3, Further, the Secretariat for Defence Acquisition Council (DAC) presently under the DCIDS (PPRFD) vertical of HQIDS will be shifted to the DG, Acquisition Wing of DOD.

4, Notwithstanding the above distribution, any matter which has an import on the Defence Policy has to be dealt by DOD.

5. This issues with the approval of Defence Secretary. 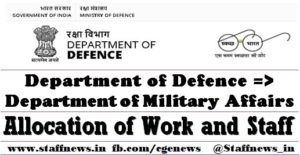 Details of Work to be transferred to DMA

1. Statutory complaints — policy of all ranks and individual cases of Army Officers on disciplinary matters only. (other individual cases are to be dealt with by respective administrative Sections).

2. Court martial and disciplinary cases for all Army officers/personnel.

5 Policy on Terms and Conditions of Service (excluding pay and allowances and pensionary benefits) of all ranks of the Army (other than those from (i) Medical, Dental and Nursing;& (ii) TA and NCC)

6. Amendment to Defence Services Regulations in r/o provisions relating to Recruitment, Terms and Conditions of Service, Discipline and Manpower Planning in Army.

5. Casualities and issue of condolence messages from Raksha Mantri to the next of kin (NOK) of Army personnel who die in various operations.

12. Policy on grant of Honorary Rank/Commission to JCOs and NCOs.(Powers in respect of individual cases stands delegated to Army HQ).

16. Individual cases regarding reserve and reinforcement.

20. Individual offers for recruitment in the Army.

21. Notification in the Gazette of India of appointment/promotion to JCO rank in respect of Infantry-6 pers. “

22. Policy on appointment of JCO as ADC to the President. °

26. Verification of character and antecedents of Army Recruits (includes cases belonging to Nepal).

28. Convention on the ‘Rights of the Child’.

29. Policy matters relating to fraud/irregularity in enrolment in Army.

30. Compassionate appointments. (Some cases are being dealt with by D(AG) and some other by respective Sections of the concerned Arms.)

34. It is administrative section for AG/Infantry-6(Pers). ,

Note – Individual cases pertaining to welfare schemes for serving soldiers as well as retired soldiers emanating from Ceremonial and Welfare(C&W) Directorate are dealt with by D(Res) section.

Note – Personnel missing in Action/ Operations is the concern of ‘G’ Wing.

41. Policy on transfers of Personnel Below Officer rank (PBOR) – individual cases of Infantry-6 (Pers) only.

Note – Actual conduct of examination etc. is carried out by UPSC and the service HQ. Admn.  Powers for grant of Commission to the Cadets delegated to Service HQ.

48. Army Reserve of ranks up to the rank of Non-Commissioned Officers.

(a) Corps of Military Police (CMP)

50. Policy relating to dresses, badges, and ribbons for the Army.

52. Welfare and entertainment of serving soldiers and their Families.

54. Matters relating to the delegation of the administrative power.