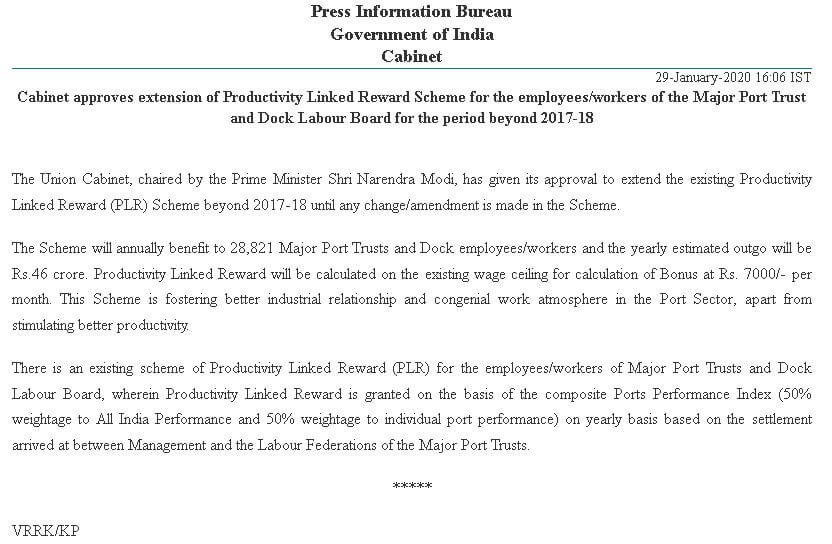 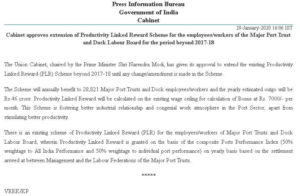 The Union Cabinet, chaired by the Prime Minister Shri Narendra Modi, has given its approval to extend the existing Productivity Linked Reward (PLR) Scheme beyond 2017-18 until any change/amendment is made in the Scheme.

The Scheme will annually benefit to 28,821 Major Port Trusts and Dock employees/workers and the yearly estimated outgo will be Rs.46 crore. Productivity Linked Reward will be calculated on the existing wage ceiling for calculation of Bonus at Rs. 7000/- per month. This Scheme is fostering better industrial relationship and congenial work atmosphere in the Port Sector, apart from stimulating better productivity.

There is an existing scheme of Productivity Linked Reward (PLR) for the employees/workers of Major Port Trusts and Dock Labour Board, wherein Productivity Linked Reward is granted on the basis of the composite Ports Performance Index (50% weightage to All India Performance and 50% weightage to individual port performance) on yearly basis based on the settlement arrived at between Management and the Labour Federations of the Major Port Trusts.