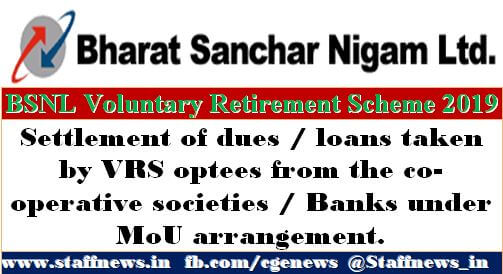 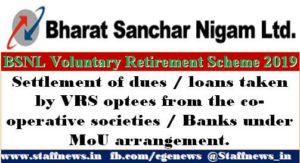 I am directed to refer to the above cited subject and to inform that various references have been received in BSNL CO seeking clarification/ guidelines for settlement / repayment of dues and loans taken by VRS optees from cooperative societies /commercial banks under MOU with BSNL. The issue has been examined in consultation with the concerned branch in BSNL Corporate office. In this regard, the following has been decided:

(i) The liability of settlement / repayment of such dues and loans lies with the individual employee concerned. Therefore, the employees who are retiring under VRS-2019 may take necessary action for settlement / closure of such dues / loans and intimate the status along with documentary evidence / NOC from Bank or co-operative society to the DDO concerned latest by 07.02.2020.

(ii) As an alternative, such VRS optees may authorize the concerned DDOs in writing, along with latest statements of total outstanding dues / loans of the co- operative society / Bank, to recover the outstanding dues / loans from leave encashment and if leave encashment amount is not sufficient the balance amount may be recovered from the first installment of ex-gratia payable to them before making payment.

(iii) Where DDO shall recover the sums from leave encashment, such amounts shall be remitted to concerned banks / societies immediately after obtaining funds from Banking Cell of BSNL CO. Further, where recourse is to be taken to ex-gratia, for effecting such recoveries after exhausting the leave encashment, the funds are to be sought from Banking Cell of BSNL CO for the whole ex-gratia amount and for utilization, it should include the sums released to the employee as also the amount recovered and released towards Bank / society dues.

(iv) Simultaneously, DDOs will communicate the list of concerned employees who are retiring under VRS- 2019 to the respective banks and cooperative societies and intimate that deduction of dues / EMIs from the salaries will not be possible after 31st Jan, 2020 from their salaries to enable the cooperative societies / banks to take necessary action for settlement of their dues/ outstanding loans.

(v) In case any VRS optee, who has outstanding liability of such dues / loans, fails to take action as per (i) or (ii) above, the amount payable on account of Leave encashment and first installment of ex-gratia will be paid after withholding such outstanding amount, without any interest thereon. The withheld amount will be released on submission of documentary evidence /NOC from Bank or co-operative society regarding settlement of dues/loans as the case may be.

This issues with the approval of competent authority.