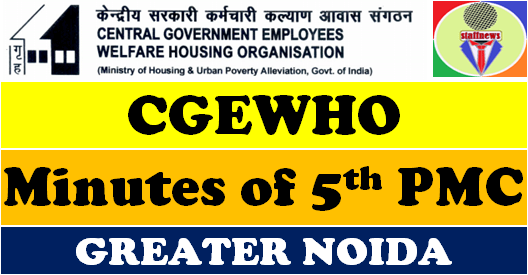 Minutes of the Fifth Project Monitoring Committee meeting held on 06.11.2019 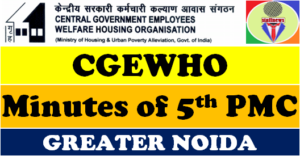 A meeting of the Project Monitoring Committee (PMC) was held under the Chairmanship of Sh Bhupinder Singh, Chief Executive Officer, CGEWHO at 3.00 PM on 06.11.2019 at Greater Noida project site. The following were present in the meeting:

2. At the outset, CEO welcomed the PMC members. Chairman asked Sh Gagan Gupta, HOD (Tech), to brief the PMC members about the various aspects of the project.

3. The action on the various points discussed in the 4th PMC meeting was discussed in detail, and pointwise status was given to the PMC members, which is as follows:

i. Since there is a major change in the policy in providing single point connection to the group housing societies, the external electrical works tender has been delayed. However, efforts are being made to get the tender through within a month or so.

ii, PMC members were briefed about the meeting held on 05.09.2019 with Dy. GM (Operations), NPCL by the officials of CGEWHO. The minutes of the said meeting held was shared with the PMC members and all the points as brought out in the minutes were discussed in detail. The same is enclosed herewith for reference and records.

iii. During the discussions, it was brought out that NGT has imposed ban on the usage of DG services towards providing power back up for the DUs. The power back up of each flat and the minimum power back up required for each type of DU is being reviewed by CGEWHO.

iv. As of now, there are around 80 DUs vacant in type “B’ and type ‘D’ . It was also informed that one block of type ‘D’ consisting of 56 DUs is being released for construction as it is anticipated that the said DUs will be subscribed at the earliest. However, the said block will have a very less impact on the completion of the project. Since this block is being released at a later stage, the completion of this block will be in the month of June 2021, i.e the beneficiaries of this block will get a delayed possession.

v. CGEWHO shared the details of defaulters with PMC members and also requested the PMC members to play active role in getting funds recovered from the beneficiaries as the project is purely being constructed on self financing scheme. Hence, the funds blocked may hamper the progress of the project.

vi. CGEWHO has also clarified that the allotment will be made as per the past practice.

viii. It was also decided that the main entrance security grilled door will not be provided and a minus D.O will be initiated. However, the main entrance door of ‘teak wood’ have been modified and was shown to the PMC members.

viii. It was requested by PMC members that the Nursing Home being built at site may be allotted to CGHS dispensary. The matter was discussed in detail and PMC members were asked to liaise with CGHS.

ix. With regard to sale of Ancillary Buildings, CGEWHO will follow the procedure as described in the Scheme Brochure.

x. With regard to calling of 5th installment, the instalment will be called in the month of January ’20.

4. The meeting concluded with the vote of thanks to the Chair.