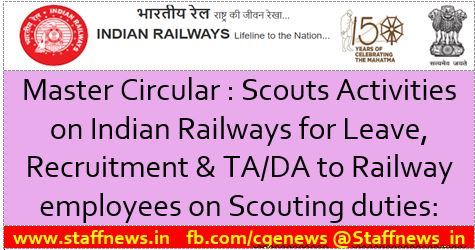 Pursuant to the issue of the Master Circular No.1/90 dated 20.8.1990, instructions have been amended and several new orders issued on the policy regarding Scouting activities on Indian Railways. The question of updating the Master Circular was under consideration of the Ministry of Railways and now, it has been decided to issue the updated Master Circular.

2. At the outset, it is mentioned that the Scouts and Guides movement, which is a world-wide one, aims at building character and inculcating a sense of discipline in those who join the organisation. These, in fact, are the very qualities expected of those engaged in public service, but are sadly lacking now-a-days, both among public servants and among the public. A large number of Railway staff come in contact with public. Their courteous behaviour towards the users and uprightness in dealing will go a long way in building the Railways’ image. As such, those who have gone through the scout movement are likely to prove more effective as Railwaymen in the day-to-day discharge of their duties.”

3. In order to give impetus to the Scouts and Gu ides Movement on the Indian Railways, the Ministry of Railways (Railway Board) have given/provided the following concessions/facilities:

(a) Grant of Special Casual Leave to Railway Servants including Apprentices and trainees, who are Boy Scouts or Rover Scouts for attending training camps or rallies or when engaged under instructions from their scouts authorities, etc. within the country or outside India within the prescribed limit of 30 days in a calendar year.

(b) In respect of Leader Trainers/Assistant Leader Trainees whose services are utilised for imparting training to scouts/guides may be granted Special Casual Leave to the extent of 45 days in a calendar year. In case leave in a calendar year is required beyond this ceiling limit of 45 days, the same should be referred to the Railway Board.
(No. E(W)86WE6-3 dated 04.12.86).

(c) Period of absence of Railway employees on account of injuries sustained by them while on Special Casual Leave granted for scouting duties for which they are required to be hospitalised also regularised as special casual leave within the overall limit of 30 days/45 days, as the case may be, in a calendar year as per (a) and (b) above respectively.

(b) Special Passes are issued to the bonafide family members of Railway employees who are appointed as office bearers of the State Association and also to those who enrol themselves as Rovers, Rangers, Cubs, Bulbuls, Scouts & Guides. These are issued for attending training camps or rallies or when engaged on other scouting activities. Such passes are also issued over Railways other than Home Railway when camps, rallies, etc. are arranged at places served by other Railways. (No.E(W)57 WE 6-l 3 dated 14.12.57).

(d) Commissioners of Scouts and Guides when required to travel on scouts duties are eligible for the concession of First Class Passes regardless of their entitlement in their individual capacity. Duty Card Passes to SOCs and STCs of all Railway states may be allowed with the personal approval of the concerned General Manager, subject to fulfilment of other terms and conditions prescribed i n the Railway Servants (Pass) Rules, 1986.
(No.E(W)65 WE 6-23 dated 26.04.66 and E(W)2016/RSGB/8 dated 06.01 .2017)

(e) Railways have powers to issue First Class Special Complementary Cheque Passes not exceeding three sets per year to the retired Railway employees on the recommendations of the CPO and the Railway State Chief Commissioners for Scouts and Guides from the station of/nearest their residence to the stations of/nearest the training camps and back subject to fulfilling the following conditions:

(i) He/she had been an office bearer of the Railway Scouts Organisation or had been an active worker for a period of at least five years assisting Railway administration in organising training camps or imparting training, etc.;

(ii) He/she would be at least a President Scout/Guide or Himalayan Wood Badge Holder; and

(iii) A certificate is given by the Railway State Chief Com missioner that the presence of the retired Railway official concerned is absolutely essential and no suitable person of his/her qualifications or calibre is available for imparting training to Railway employees.

(a) TA/DA as on tour at the rates appropriate to the pay of employees subject to a maximum of 15 days in a calendar year paid to scouts/guides/adult leaders/commissioners/rovers/rangers for the following activities:

(b) When deputed to attend training camps/courses organised by the State/Distt. Scout Associations, Himalayan Wood Badge Training courses or for imparting training to children, Scouts/Guides/Rovers/Rangers.

(d) Scouts/Guides officials deputed to attend meetings of the State/National Body; and

(e) Railway employees who are deputed to impart training or organise major scouts/guide events, such as rallies, Jamborettes, conferences, etc. at the State or National levels.

(i) The expenditure on TA/DA is to be met from Revenue.

(ii) Grant of 15 days TA/DA should be within the ceiling of 30 days/45 days of Special Casual Leave.

The annual quota for recruitment is as under :

4. The annual per capita contribution from Staff Benefit Fund for Scouts and Guide activities is Rs.22/-. The expenditure on scouts activities in Railway schools also should be met out of the contribution of Staff Benefit Fund of the respective Railways. Allotment of funds for promotion of scouts activities will be made by the Ministry of Railways in consultation with the apex body viz. the Railways Scouts and Guides Board.

5. In view of the purely non-commercial nature of activities of the Bharat Scouts and Guides organisation and the need to encourage the scouts and guides movements, it has been decided by the Railway Board to charge a nominal licence fee of Re.20/- per annum only in respect of building/structure licensed to the Bharat Scouts and Guides organisations.
(No.88 LM(B)/38/Scouts dated 18.12.1989)

6. Ministry of Railways have also decided that when a Railway employee acquires any qualification in the field of Scouting, a suitable entry should be made in his service record. (No.E(NG)I-88CR 4 dated 12.05.89).

7. Ministry of Railways (Railway Board) have set up an Apex Body called the Railways Scouts & Guides Board consisting of:

Note: The Chairman of the Apex Body shall invite one of the Railway State Chief Commissioners for scouts and guides as may be nominated by the General Council (consisting of the apex body and the Railway State Chief Commissioners Scouts and Guides) as a special invitee to attend the meeting of the apex body also known as the Managing Committee of the Railways Scouts & Guides Board.

8. Objectives of the Apex Body:

(i) to have a general review of the progress of scouting movement on the Indian Railways;

(iii) to oversee that the grants from the Staff Benefit Fund are properly and purposefully utilised.

(i) Scouts & Guides should be encouraged to adopt a village near their place of work for imparting training/undertaking work on adult literacy, hygiene, civic sense, etc. including organising entertainment programmes for the benefit of local population.
(No. E(W)86 WE 6-8 dated 07.05.86).

(ii) All necessary steps should be taken to make Scouts & Guides activities mandatory for Railway school children who are not members of NCC/NSS etc.
(No.E(W)2015/RSGB/8 dated 17.07.2015).

(iii) When lectures are delivered on “Staff Welfare” in Railway Staff College, Zonal Training Schools and all other training institutes, the activities of the Railway Scout Organisations should be highlighted so that the employees may be induced to take interest i n such activities. (No.E(W)88 WE 6-5 dated 16.05.88 and 09.09.88).

(iv) Railways should not de-register wards (Scouts/Guides) of Railway servants after their retirement, etc. and such wards should be allowed to continue as members of the respective Railway Scouts and Guides Associations of the Zonal Railways and Production Units. However, termination of the membership of a Scouts/Guide will be governed by the rules laid by the Bharat Scouts & Guides.
(No. E(W)97/WE-6/11 dated 30.01.2001 and No. E(W)2012/WE-6/15 dated 21.11.2012).

(v) The staff associated with Scouts/Guides activities may be released when required by the Zonal Railways’ Scouts & Guides Associations without, of course, adversely affecting Railway operations. It may also be ensured that services of such staff who have been recruited against the Scouts & Guides quota should be utilized to meet the objectives behind recruitments against the quota.
(No. E(W)2007/WE-6/12 dated 23.01.2008).

(vii) All Scouting events held at the all Indian Railways level such as IR Cub Bulbul Utsav, IR Rover Ranger Samagam, IR Cultural Exchange Programme, etc. should be treated at par with the Indian Railways Jamborette.
(No. E(W)2015/RSGB/8 dated 15.07.2015).

(xi) It has been decided in consultation with the Ministry of Human Resource Development (Department of Secondary & Higher Education) and the Ministry of Personnel, Public Grievances & Pensions (Department of Personnel & Training) that a railway servant serving in a railway school shall be entitled to Leave on Average Pay under and subject to provisions of Rule-525(3) of REC Vol. I fifth Edition-1985 (second reprint edition-2003) in respect of the vacation or a portion thereof not availed/foregone for undertaking scouts and guides activities as per orders of the competent authority.
(No. E(W)2001/WE-6/14 dated 04.10.2006)

11. It should be noted that the orders/instructions issued under the various circulars have only prospective effect from the date of issue of the relevant original letter(s), unless specifically stated otherwise in the concerned letter. Hence, for dealing with old cases the instructions in force at the relevant time should be referred to.

12. Though efforts have been made to include all the relevant circulars on the subject, if any circular which has not been superseded, happens to be omitted, that circular, which has been omitted through oversight, will still hold the field. Anyone coming across such a circular may bring it to the notice of the Railway Board for suitable action for issuing a Supplementary Circular.