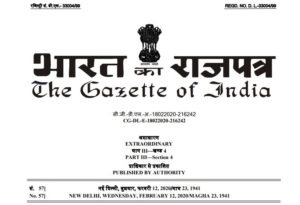 1.1 These may be called the Airports Authority of India (Recruitment and Promotion) Regulations, 2020.

1.2 These shall come into force on the date of their Gazette Notification

(2) The regular continuous service of incumbent referred to above in the respective grade immediately before the commencement of these regulations shall be taken into account for the purpose of period of probation, seniority, qualifying service for promotion, confirmation etc.

In these Regulations, unless the context otherwise requires –

3.2 After the commencement of these Regulations, the authorized strength of the posts in various grades shall be such as may from time to time be determined by the

3.3 The Authority may create posts and make additions or deletions to the strength of the posts in various grades as deemed necessary from time to time, as provided in the Note under Section 4(2) of AAI (General Conditions of Service and Remuneration of Employees) Regulations,

3.4 The Chairperson may with the approval of Authority include any allied posts other than those included in Para-4 of these

3.5 In exceptional circumstances and beyond delegation of powers, the Chairperson may with the approval of Authority appoint an officer to an appropriate grade in the Executive or Non-Executive cadre in a temporary or in a substantive capacity as may be deemed fit in the interest of the Authority and fix his seniority in the grade after taking into account his continuous regular service in the analogous Any such induction will be reported to the Board at the earliest.

3.6 Re-employment of superannuated servants/ extension of service of AAI employees beyond the age of superannuation in exceptional circumstances can be made in accordance with the Government guidelines.

3.7 In certain circumstances, appointments may be made on a consolidated salary as may be determined by the Competent Authority instead of regular pay-scales enumerated in Para-4 of these Regulation.

4.1 The posts in Authority are broadly categorized as Executive and Non-Executive and all in the following groups/levels:

4.2 The Authority will have the discretion to change the scales of pay from time to time.

4.3 Employees recruited in the Authority’s service shall be placed in any of the approved pay scales of the Authority as prevailing from time to time and applicable to the post to which recruitment is made, save as provided in Para-3 of these Regulations.