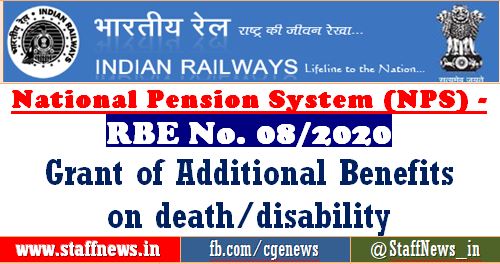 Attention is invited to Board’s letter No. 2008/AC-II/21/19 dated 29.05.2009 vide which instructions were issued providing for additional relief on death/disability of Government servants covered by New Defined Contribution Pension System(NPS). Instructions issued vide letter ibid will be applicable to those Government Servants who joined Government Service on or after 01.01.2004 and will take effect from the same date i.e. 01.01.2004. Further, attention is invited to the letter No. 2016/F(E)III/1(1)/3 dated 27.05.2016 vide which Pension Fund Regulatory and Development Authority (Exits and Withdrawals under NPS) Regulation, 2015 notified vide Gazette notification dated 11.05.2015 was adopted and circulated on Railways. It is prescribed in these regulations that if the subscriber or the family members of the deceased subscriber, upon his death, avails the option of additional relief on seek transfer of the entire accumulated pension wealth of subscriber to itself.

2. References were received in this office seeking clarification whether the rule allowing option for drawl of pension/ family pension, instead of NPS corpus, is also applicable retrospectively for the cases where corpus of NPS has already been paid to the deceased employee’s legal heirs before issue of board’s letter No. 2008/AC-II/21/19 dated 29.05.2009. If the date of application of additional benefit is retrospective, whether it is from the date the employee deceased or from the date of issue of Board’s letter dated 29.05.2009. Also, whether the arrears of pension/family pension is to be paid (upon surrender of NPS Corpus) or not, and the amount is likely to be huge which would impact the Railway Finances. Clarification was, also, sought whether the interest on the corpus is to be charged from the date of payment of corpus amount till the date of is surrender and if so, at what rate.

3. The above issue has been examined in consultation with Department of Pension and Pensioners’ Welfare (DOP&PW), the nodal Department of pensioner matters. DOP&PW has clarified that Railway servant/ family member in the case of death of railway servant of his discharge from service on account of invalidation/ disability, is entitled to pension/ family pension under old pension scheme under Railway Services (Pension) Rules, 1993, if the Railway servant/ Family wants to. DOP&PW have, further, clarified that the entire accumulated pension funds under NPS may be recovered from him/family with interest for the period from the date of receipt of entire accumulated pension wealth to the subscriber under NPS to the date of refund to the Government at the rate and manner applicable to GPF deposits from time to time.

4. The fore said clarification may be kept in view while dealing with cases covered under National Pension System (NPS). 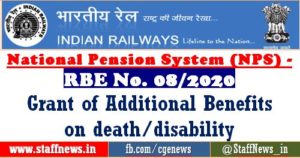