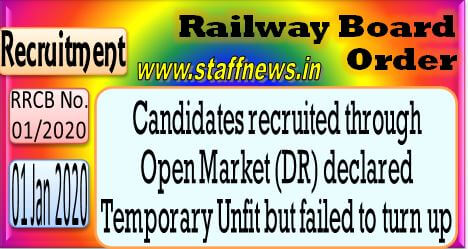 Candidates recruited through Open Market (DR) declared Temporary Unfit but failed to turn up: Railway Board RRCB No. 01/2020

Candidates recruited through Open Market (DR) declared Temporary Unfit but failed to turn up: Railway Board RRCB No. 01/2020

It has been brought to the notice of Ministry of Railways, Railway Board that candidates who have been recruited through Open Market (Direct Recruitment) declared Temporary Unfit fail to turn up for re-examination after completion of the specified period.  In the absence of clear cut policy the candidates were repeatedly chased over phone & emails to attend the Railway hospital leading to delay in formation of the panels.

2 The matter has been considered in consultation with the Health Dte. of Railway Board and it has been decided that in case the candidate does not report back within six months which is the maximum permissible period, the course of action as brought out in para 3(V & VI) of Health Dte. letter No.2014/H/5/8 (Policy) dated 31.12.2015 should be followed.

Copy to: All PCMDs/CMOs of Indian Railways and Production Units for information and necessary action, if any.