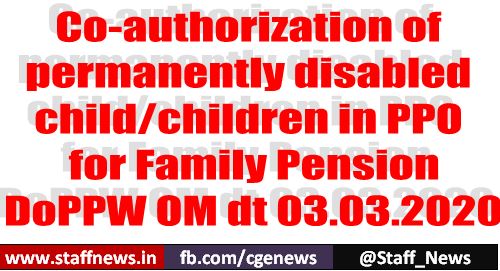 It has come to the notice of this Department that pensioners are facing difficulties in co-authorizing their disabled child or sibling in the Pension Payment Orders (PPOs), due to the insistence of sanctioning authorities for supply of information such as passport size photographs of the guardian, copy of passbook!particulars indicating Bank account details of the guardian, etc. The undersigned is directed to say that several guidelines have already been issued in the matter to avoid any hardship to pensioners while processing their case of co­ authorization in favour of permanently disabled child/children or sibling. On the basis of OMs already issued, the process of co-authorization is being reiterated as under-

Sd/-
(Sanjoy Shankar)
Under Secretary to the Government of India