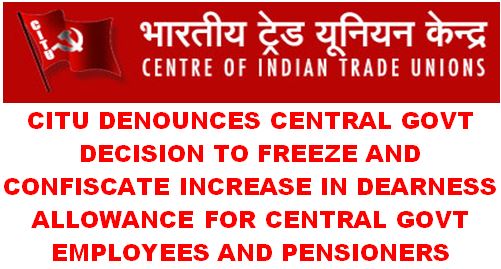 CITU (the Centre of Indian Trade Unions) denounces the Central Govt’s decision to freeze, rather confiscate the increase in Dearness Allowance payable to Central Govt employees and pensioners falling due from January 2020

The Centre of Indian Trade Unions denounces the Central Govt’s decision to freeze, rather confiscate the increase in Dearness Allowance payable to Central Govt employees and pensioners falling due from January 2020 and also future dues, falling due on July 2020 and January 2021 on the plea of financial crisis arising out of COVID 19 vide Finance Ministry Order no 1/1/2020-E-II(B) dated 23rd April 2020.

No doubt, the country has been passing through a financial crisis but why should the workers and employees be made the sacrificial item for the same who themselves suffer most owing to Covid-19 followed by lockdown. Quite a number of employees are deployed and consequently are involved in various governmental activities and services meant to combat the spread of the pandemic Covid-19 especially of those departments declared as emergency services viz, health, postal, defence, railways etc. While taking such decision Govt did not bother to consult the unions and federations of the central govt employees, displaying rabid authoritarianism.

CITU strongly urges that response to financial crisis by the central govt must start with measures to garner resources where it is there aplenty at the disposal of handful of ultra rich class. As Per OXFAM Report, combined wealth amassed by only 63 billionaires in India is more that the total Union Budget in 2018-19 which was at Rs 24, 42, 200 crore. Top 10% of population cornered 77% of national wealth. Wealth of India’s richest 1 per cent is 4 times more than the bottom 70%. Govt must tap this huge accumulation of wealth with barely 5% of ultra-rich, amassed mostly through undue and illegitimate patronization of the economic policy regime, through appropriate direct taxation/wealth tax measures instead of brutally pouncing on the working peoples’ earnings and livelihood. And this right is vested with the Central Govt only

CITU strongly condemns this retrograde decision of the Central Govt to confiscate outright the legitimate dues of the employees and pensioners on account of increase in DA till January 2021, although prices of all essentials will continue to increase to further increase the profit of the big-business / corporate.

CITU demands withdrawal of this DA Confiscation order by the central government also demands that the state governments be extended financial help to enable continuity of variable DA payment to their employees. CITU calls upon the Govt employees’ movement in particular and the trade union movement in general to unitedly oppose this retrograde anti-worker measures. 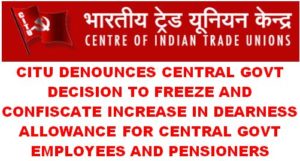