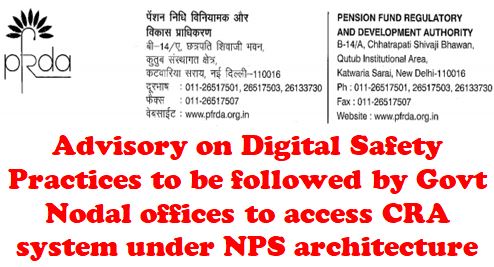 The function of nodal office/s in the Government Sector i.e. Central and State Governments including Central and State Autonomous Bodies in relation to National Pension System (NPS) is of paramount importance and vital as it begins with subscriber registration and continues till the authorization of exits/withdrawals request of the subscriber-employees. To enable the Nodal offices to fulfill such function/role in the CRA system, the Nodal offices have been provided with the separate maker-checker login-IDs to access the CRA-system.

However, it has come to the notice of the Authority that in certain instances, the maker-· checker login-IDs provided by the CRAs to the Nodal office/s for accessing the CRA system to initiate/process and authorize various requests submitted by the subscribers-employees has been used by the unauthorized official/staff of such Nodal offices, i.e., other than the officials authorized to access the CRA-system under the NPS architecture.

Keeping in view the above, all the nodal officers in the Government Sector i.e. Central Government/Ministries/Departments and State Governments including Central and State Autonomous Bodies are hereby advised to follow the following Digital Safety Practices under the NPS architecture while accessing the CRA System:-

1. To  maintain absolute confidentiality  and integrity of all records, data and information including subscriber’s personal information, contribution and claims data;

2. To use at least 8 characters or more to create a password. The more number of characters, Special Symbols, Number we use, the more secure is our password;

3.  Users are responsible for safeguarding their User Id and Passwords and must not share passwords/Digital token with other persons;

5. The access to CRA system should be done by officials of the Nodal office so authorized and Passwords/login details etc. are not be shared with the unauthorised personnel;

6. Do not access files without the permission of the owner. Use maker and checker to monitor what data is being copied or modified in contribution/claims file;

7. Users should not intentionally use the computers to retrieve or modify the information of self/others, which may include password information, claims data, contribution data, withdrawal request, PRAN details etc.;

9.  Scan all the files after you download whether from websites or links received from e-mails;

10. Always update Web Browser with latest patches. Never click web links in e-mail and no bank will ask you to update the accounts through online; 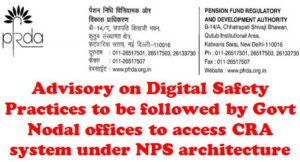 Loading...
Newer Post
Selection Controller (GP 4200) in Indian Railway, revision of mode of filling up the post: Railway Board Order  RBE No. 40/2020
Older Post
‘Designated Officer’ to decide compensation of Rs.10 Lakh for death due to COVID 19 i.r.o GDS and all Postal Employees