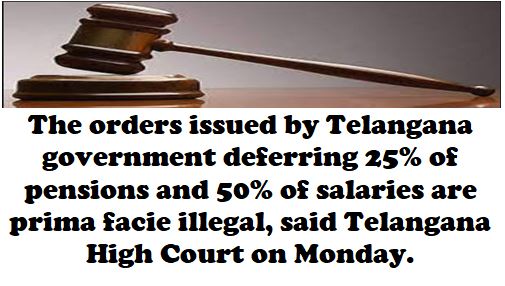 A GO has to go if it is not backed by law, says HC

The orders issued by Telangana government deferring 25% of pensions and 50% of salaries are prima facie illegal, said Telangana High Court on Monday.

The bench of Chief Justice Raghvendra Singh Chauhan and Justice B. Vijaysen Reddy, hearing a batch of PIL petitions challenging deferment of pensions and salaries, said the government orders were not backed by any provision of the law. Observing that State government cannot issue ‘farman’ as per its wishes, the CJ said that a “Government Order’ has to go if it was not backed by the law.

During the lockdown imposed due to COVID-19, the State government in April issued orders deferring 50% of the pension amounts to retired employees. Following the HC intervention, the deferred pension amount was brought to 25%. 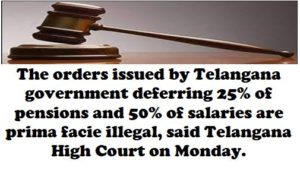 The bench asked Advocate General B.S. Prasad how the government expected the retired employees to manage with 25% of pension deferment since that was the only source of income for them. How can they meet their medical and other expenses, it sought to know.

Even as the AG requested time for explaining the government stand, the bench said it cannot adjourn it till July since the pensioners were suffering. The court cannot allow the retired employees to face difficult situations, it said. “We cannot leave them hanging in air,” the bench remarked.

Presenting his contentions, the AG said the State was reeling under financial repercussions arising out of the lockdown due to coronavirus. Even the Centre had deferred release of GST related arrears to the State. The AG said that impossibility theory had emerged in the backdrop of lockdown and even the courts had recognised the situation.

He told the court that the government’s decision to defer pension amounts was backed by Supreme Court judgements and would present before the bench in the next hearing. But the bench, differing with the AG’s contentions, said pension payments cannot be deferred until and unless government declared a financial emergency.

“Once an appointment is made under statutory rules, the conditions of service are governed by statutory rules and pension was part of it,” the bench said. Stating that unless those statutory rules empower State to defer pension, the government orders can be set aside, the bench noted.

The bench said the government should clarify how long pension payments would be deferred and it cannot keep the pensioners guessing. The matter was posted to Wednesday for next hearing.