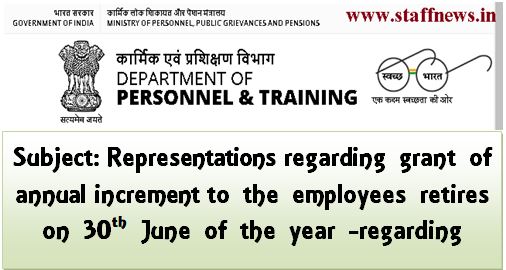 Representations regarding grant of annual increment to the employees retires on 30th June of the year: DoP&T O.M.

Representations regarding grant of annual increment to the employees retires on 30th June of the year: DoP&T O.M. Clarification issued by DoP&T to Ministry of Railway. 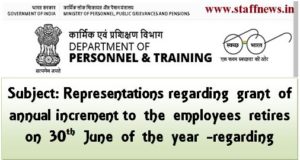 Subject: Representations regarding grant of annual increment to the employees retires on 30th June of the year -regarding

The undersigned is directed to refer to letter No. PC VI /2018/R-] /1 of Ministry of Railways dated 14/ 10/2019 on the subject cited above wherein comments of this Department has been sought on the directions of Hon’ble CATs issued in several Court cases filed by Railways employees Seeking the benefits of notional increment for the Pensionary benefits as per the judgment in P.Ayyamperumal case.

2. In this matter, With reference to Central Government employees, the following is hereby Stated:

2.3 It is relevant to mention here that in a similar Matter, Hon’ble High Court of Andhra Pradesh at Hyderabad in year 2005, inc. Subbarao case, has inter-alia observed as under:

“In Support of the above observations, the Division Bench also placed reliance on Banerjee case (Supra), we are afraid, the Division Bench  was not correct in coming to the conclusion that being a reward for unblemished Past service, Government servant retiring on the last day of the month would also be entitled for increment even after such increment is due after retirement, We have already made reference to all Rules governing the situation: There is no warrant to come to such conclusion, Increment is given (See Article 43 of CS Regulations) as a Periodical rise to a Government employee for the good behavior in the Service. Such increment is Possible only when the appointment is “Progressive Appointment” and it is not  universal ryle. Further, as per Rule 14 of the Pension Rules, a person is entitled for pay, increment and other allowances only when he is entitled to receive pay from out of Consolidated Fund of India and continues to be in Government Service.  A Person who retires on the last working day would not be entitled for any increment falling due on the next day and payable next day thereafter (See Article ] Sl of CS Regulations) because he would not answer the tests in these Rules. Reliance placed on Banerjee case (supra) is also in our considered opinion not correct because as observed by us, Banerjee case (supra) does not woe deal with increment, but deals with enhancement of DA by the Central Government to pensioners. Therefore, we are not able to accept the view taken by the Division Bench. We accordingly, overrule the judgment in Malakondalah case (Supra).”

3. Further, it is also stated that this Department’s OM No. 20036 /23/1988-Estt.(D) dated 06.01.1989 provides that since each case is to be contested on the basis of the specific facts and circumstances relevant to it, the administrative Ministry/Department (D/o- Ministry of Railways in the instant case} will be in a better position to defend the case if required. If, however, any Clarification is required on the interpretation application of the rules or instructions relevant to the case, the concerned department in the Ministry of Personnel, Public Grievances and
Pensions may be approached for that Purpose. It further provides that the primary responsibility, however, for contesting such cases on behalf of the Government will be that of the administrative Ministry /Department concerned. Further, the Cabinet Secretariat D.O. letter No. 6 /1/1/94-Cab dated 25.02.1994 as also the Cabinet Secretary’s D.O. letter no. 1/50/3/2016-Cab dated 16.06.2016 and the Department of Expenditure’s OM No. 7(8)/2012-E-III(A) dated 16.05.2012 inter-alia provide that (i) a common counter reply should be filed before a Court of Law on behalf of the Union of India by the concerned administrative Department / Ministry where the petitioner is serving or has last served and (ii) a unified stand should be adopted instead of bringing out each Department’s /Ministry’s point of view in the said reply. It further provides that it is primarily the responsibility of the Administrative Ministry to ensure that timely action is taken at each stage a Court case goes through and that a unified stand is adopted on behalf of Government of India at every such stage. In no case should the litigation be allowed to prolong to the extent that it results in contempt proceedings.

4. Ministry of Railways is requested to take appropriate action in the  light of above observations.

Source: Railway Board Click here to view/download the PDF