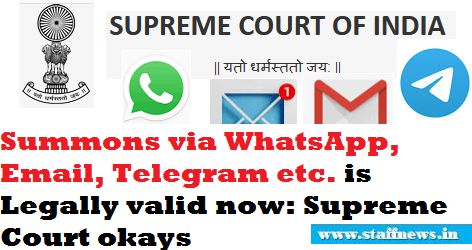 NEW DELHI: In a first, the Supreme Court on Friday agreed in principle that serving notices and summons to people, integral to judicial processes, through instant messaging services like WhatsApp and Telegram, in addition to emails, would be legally valid.

This will be a significant boost to designated messaging services, already widely used informally for official work in government, as they get a legal stamp of approval.

A bench of Chief Justice S A Bobde and Justices R S Reddy and A S Bopanna said this innovation was needed as physical delivery of notices and summons had been difficult during the lockdown.

The bench agreed to suggestions of attorney general K K Venugopal and solicitor general Tushar Mehta that sending summons and notices through email would constitute valid delivery of these legal instruments asking a respondent to either appear before the court or respond to a court query.

Expected DA – AICPIN for the month of May, 2020 increased by 1 points

On another issue, the SC agreed to examine the Centre’s suggestion that banks could be permitted to get Letter of Acknowledgement of Debt (LAD) from borrowers within 45 days of lifting of lockdown to avoid initiation of recovery proceedings. This would ease anxiety of banks and thousands of borrowers in cases of expiry of three-year limitation period during the prolonged lockdown which could lead to initiation of recovery proceedings.

On messaging services, Venugopal expressed reservations about WhatsApp. “Since the messenger service claims that it is end-to-end encrypted, it would be difficult to prove legitimate service of summons/notices sent through WhatsApp,” he said.

The CJI replied, “If the sent notice/summons in message form reflects two blue ticks, then it will constitute as valid service.”

However, Mehta said, “It is easy to tweak WhatsApp settings, as I have done, to not show the sender the blue ticks. This will give an erroneous impression that the person has not received the summons despite him receiving and going through it.” Senior advocate Sidharth Luthra agreed with Mehta.