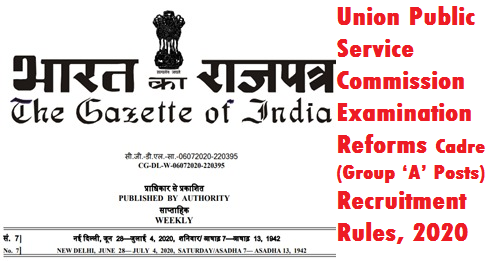 MINISTRY OF PERSONNEL, PUBLIC GRIEVANCES AND PENSIONS (Department of Personnel and Training)

(1) These rules may be called the Union Public Service Commission Examination Reforms Cadre (Group ‘A’ Posts) Recruitment Rules, 2020. (2) They shall come into force on the date of their publication in the Official Gazette. (3) These rules shall be applicable to the officers of Examination Reforms Cadre in the Union Public Service Commission.

In these rules, unless the context otherwise requires-

(b) “Cadre” means Examination Reforms Cadre in the office of the Commission, who are involved in design and development of assessment materials, periodic development and revision of test curriculum and in other works as assigned by the Commission as per requirement;

(c) “Scheme” means the Career Progress Oriented Scheme for the Officers of Examination Reforms Cadre in the office of the Commission approved by the Department of Personnel and Training vide, letter no. 39011/02/2018-Estt. (B) dated 22/08/2019;

(d) “Schedule” means the Schedule annexed to these rules.

3. Number of post, classification and level in pay matrix. —

The number of posts, their classification and the level in the pay matrix attached thereto shall be, save as provided in the Scheme, as specified in columns (2) to (4) of the Schedule.

4. Composition and authorised strength of Cadre. —

(1) All the posts in the Cadre shall be classified as General Central Service Group ‘A’.

(2) The authorized strength of the posts included in the entry level of the Cadre, the level in the pay matrix and other matters connected therewith shall be such as may be specified in the Table below, namely:-

(3) The authorised permanent strength of the posts in the entry level shall be such as may, from time to time, be determined by the Commission.

(4) The Commission may make temporary addition to, or reduction in, the strength of the posts in the entry level as deemed necessary subject to variation depending on work load from time to time.

(6) The Commission may appoint an officer whose post is included in the Cadre under sub-rule (5), to the appropriate grade of the Cadre in a temporary capacity or in a substantive capacity, as may be deemed fit, and fix his seniority in the grade after taking into account continuous regular service in the analogous grade.

(b) persons appointed to duty posts under rule 6.

(2) A person appointed under clause (b) of sub-rule (1) shall, on such appointment, be deemed to be the member of the Cadre in the appropriate grade applicable to him as specified in the Table mentioned in sub-rule (2) of rule 4.

(1) The vacancies caused due to any officer vacating the post by retirement on superannuation or voluntary retirement or resignation or death in any of the grades referred to in the table mentioned in sub-rule (2) of rule 4 shall be filled in at the level of Deputy Director (Examination Reforms) on direct recruitment basis.

(2) The method of recruitment, the field of selection for promotion, including the minimum qualifying service in the immediate lower grade or lower grades as the case may be, for appointment or promotion to the posts, included in the Cadre shall be as specified in columns (5) to (13) of the Schedule.

(4) The minimum benchmark required for promotion to various grades of the Cadre under the Scheme shall be as specified in Annexure II.

(5) The minimum educational and other qualification, experience and age-limit for appointment to entry level posts in the Cadre by direct recruitment shall be as specified in the Schedule for the post of Deputy Director (Examination Reforms).

(6) The promotion to various grades of the Cadre, other than entry grade, shall be without linkage to vacancies.

(1) The relative seniority of officers of the Cadre appointed to any grade in the Cadre, on the date of commencement of Scheme shall be as determined by the Commission:

Provided that if the seniority of any such officer had not been specifically determined on the said date, the same shall be determined on the basis of the rules governing the fixation of seniority as were applicable to the members of the Cadre prior to the commencement of Scheme.

(2) The seniority of officers appointed to the Cadre other than those officers appointed under rule 5 shall be determined in accordance with the general instructions issued by the Central Government in the matter from time to time.

(3) The seniority of a person in Cadre who are promoted to the posts up to the level of Senior Administrative Grade shall be same as the relative seniority in the lower grade from which they are promoted:

Provided that, in the case of persons found ‘unfit’ for time-bound promotion, their seniority shall be determined with reference to the date of actual promotion at each level.

(4) In cases not covered by this rule, seniority shall be determined by the Commission.

(1) Every officer appointed to the Cadre by direct recruitment shall be on probation for a period of one year:

Provided that the Controlling Authority may extend the period of probation in accordance with the instructions issued by the Central Government from time to time in this behalf:

Provided further that any decision for extension of the period of probation of an officer shall be taken immediately after the expiry of initial period of probation and ordinarily within eight weeks and communicated in writing to the concerned officer together with the reasons for so doing within the said period.

(2) On completion of the period of probation or any extension thereof, officer shall, if considered fit for permanent appointment, be confirmed in terms of the extant order of the Central Government.

(5) The other matters relating to probation of the officers of the cadre shall be governed by the orders or instructions issued by the Central Government in this regard from time to time.

9. Appointment in the Service.—

All appointments to the Cadre shall be made by the Chairman of the Commission.

10. Other conditions of Scheme.—

The other conditions of service of the officers of the cadre shall be as specified in Annexure III.

The method of recruitment, age-limit, qualifications and other matters relating thereto shall be as specified in columns (5) to (13) of the Schedule.

(a) All existing officers holding regular posts in Cadre on the commencement of these rules shall be the officers of the cadre in the respective grades.

(b) The regular continuous service of officers referred in sub rule (a) before the commencement of these rules shall count for the purpose of seniority, qualifying service for promotion and pension in service.

14. Power to relax.— Where the Central Government is of the opinion that it is necessary or expedient so to do, it may, by order, and for reasons to be recorded in writing, and in consultation with the Union Public Service Commission, relax any of the provisions of these rules with respect to any class or category of persons.

15. Saving.— Nothing in these rules shall affect reservation, relaxation of age-limit and other concessions required to be provided for the Scheduled Castes, the Scheduled Tribes, other backward classes, Ex-Servicemen and other special categories of persons in accordance with the orders issued by the Central Government from time to time in this regard.

For getting the benefit of promotion under C-POSER Scheme, an Officer shall fulfil following criteria on the crucial date of determining eligibility:

(b) (i) Shall be clear from vigilance angle;

(ii) Shall have his INTEGRITY beyond doubt;

(iii) Shall have earned requisite number of APARs; and

(iv) Shall have obtained the benchmark grading of Very Good with 7.5 and above in every assessment year;

The crucial date of determining eligibility shall be First January of the assessment year.

‘Residency period’ for the purpose of the Scheme shall commence from the date of joining of the post in Deputy Director (Examination Reforms) on regular basis through direct recruitment. Service Rendered on ad-hoc/ contract basis before regular appointment or on pre-appointment training shall also not be taken into account for reckoning residency period.

(a) Further, the following periods shall count towards the minimum residency period necessarily required to be put up in the lower grade for promotion to the next higher grade:

(i) The period spent on deputation/ foreign service to another similar post (academic post), which may help the Officer of the Cadre of Commission to acquire scientific/ academic experience in a diverse set up shall count towards the minimum residency period under the Scheme.

(ii) The period of study leave/any other leave granted/period spent on training for improving the academic accomplishment of the officers, shall count towards the minimum residency period under the Scheme.

(iii) Earned Leave sanctioned for a period of not exceeding 180 days at a time as per leave rules, shall also count towards the minimum residency period under the Scheme.

(iv) Maternity/ Paternity Leave sanctioned as per Leave Rules shall also count towards the minimum residency period under the Scheme.

(v) Leave of a maximum period of one year (including Child Care Leave) sanctioned in continuation of Maternity Leave as per Leave Rules may also be taken into account while counting the minimum residency period for promotions under the Scheme.

(b) Further, all the following periods shall not be counted, while computing minimum residency period for promotions under the Scheme:

(i) period spent on deputation/ Foreign Service to a non-academic post.

(ii) period spent on Medical Leave for a period exceeding 30 days at a time.