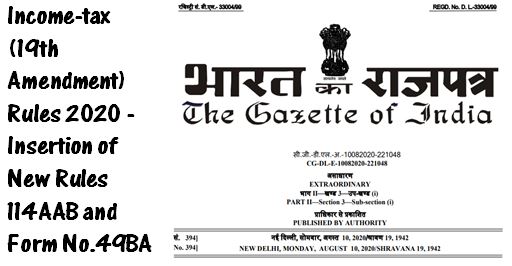 Income-tax (19th Amendment) Rules 2020 – Insertion of New Rules 114AAB and Form No.49BA for any income-tax due on income of non-resident has been deducted at source and remitted to the Central Government.

MINISTRY OF FINANCE
(Department of Revenue)
(CENTRAL BOARD OF DIRECT TAXES)

(2) They shall come into force from the date of their publication in the Official Gazette.

2. In the Income-tax Rules, 1962 (hereinafter referred to as the principal rules), in rule 37BC, after sub-rule (2), the following sub-rule shall be inserted, namely:—

3. In the principal rules, after rule 114AAA, the following rule shall be inserted, namely:— “Class or classes of person to whom provisions of section 139A shall not apply.

114AAB. (1) The provisions of section 139A shall not apply to a non-resident, not being a company, or a foreign company, (hereinafter referred to as the non-resident) who has, during a previous year, made investment in a specified fund if the following conditions are fulfilled, namely:—

(i) the non-resident does not earn any income in India, other than the income from investment in the specified fund during the previous year;

(ii) any income-tax due on income of non-resident has been deducted at source and remitted to the Central Government by the specified fund at the rates specified in section 194LBB of the Act; and

(iii) the non-resident furnishes the following details and documents to the specified fund, namely:—

(b) address in the country or specified territory outside India of which he is a resident;

(c) a declaration that he is a resident of a country or specified territory outside India; and

Explanation.- For the purposes of this rule-

(a) “specified fund” means any fund established or incorporated in India in the form of a trust or a company or a limited liability partnership or a body corporate which has been granted a certificate of registration as a Category I or Category II Alternative Investment Fund and is regulated under the Securities and Exchange Board of India (Alternative Investment Funds) Regulations, 2012, and which is located in any International Financial Services Centre;

(b) “International Financial Services Centre” shall have the same meaning as assigned to it in clause (q) of section 2 of the Special Economic Zones Act, 2005 (28 of 2005).”.

4. In the principal rules, in Appendix II, after Form No.49B, the following Form shall be inserted, namely: —

Quarterly statement to be furnished by specified fund in respect of a non-resident referred to in rule 114AAB for the quarter of ………… of ….. (Financial Year)

I ……………… (full name in block letters), son/daughter of …………… having permanent account number / Aadhaar number ………………, solemnly declare that to the best of my knowledge and belief, the information given above are correct and complete.

Attachments (to be uploaded)

Declaration received from the non-resident as referred to in sub-clause (c) of clause (iii) of sub-rule (1) of rule 114AAB.”. 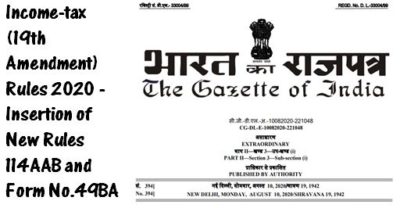 Source: Click here to view/download the PDF of Notification