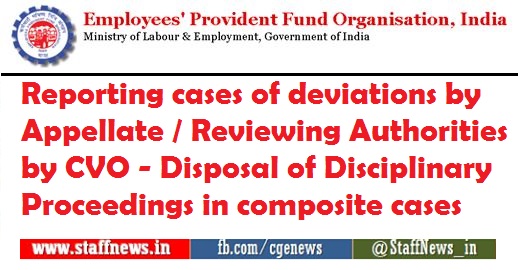 In terms of the provisions laid down in para 7.38 pf Chapter – VII of the Vigilance Manual, 2017 and above mentioned Circulars, in matters of appeal, the Appellate Authority is expected to keep in view the advice tendered by the Commission the Appellate Authority/ Reviewing Authority decide to deviate from the advice given CVO is required to report such individual cases decided at appeal/ review stage to the Commission which would thereafter take an appropriate view whether the deviation is serious enough to be included in its Annual Report.

2.  Of late, it has been observed that such deviations at the stage of the Appellate Authorities are not being timely reported to the Commission by the Chief Vigilance Officers (CVOs) of the Organisations. In addition such deviations are also to be reported in the Quarterly Performance Reports (QPRs) being submitted online by CVOs every quarter under the head “Part 5, (D) Appellate Authority (Deviation/ Non-acceptance)”.

Please find enclosed herewith eve circular dated 20/07/2020 wherein the CVC has reiterated the provisions laid down in para 7.38 of chapter VII of Vigilance Manual,2017 that the Appellate Authority is expected to keep in view the advice tendered by the CVC/penalty imposed by the Disciplinary Authority and decide the appeal.

2. Attention is also drawn on the provisions laid down in para 1.6.6 of chapter I of Vigilance Manual, 2017 that in all composite cases where the case has tendered first stage advice , after the conclusion of oral inquiry and before the issuance of final order, it is mandatory to consult eve for second stage advice if the opinion of the Disciplinary Authority(DA) is at variance with the first stage advice. As per the said provision if  there is no deviation from the first stage advice the case shall be dealt with at the level of CVO. Thus in compos the cases where Group B/C officials are also involved, the advice the CVC is expected to be keep it view while passing final order in a  disciplinary  proceeding  and should be referred to the CVO before passing the final order.

3. Keeping in view the eve circular dated 20/07/2020 and the provisions laid down in Vigilance Manual, 2017 the following directions are issued for strict compliance while conducting disciplinary proceedings under EPF Staff (CCA) Rules 1971 in cases where vigilance angle is present :

(i) Composite cases are those vigilance cases where non-Group A officials are also involved along with those belonging to Group A. The RPFC in charge of the region is the Disciplinary Authority(DA) in respect of officials belonging to the cadres of SS/SSA/Sr.SSA/LDC/UDC/MTS in terms of Rule & of EPF Staff (CCA) Rules  1971.  In  all  such  composite  cases. where the disciplinary proceedings against the  non-group-A  officials involved are conducted by the RPFC-in charge. being the DA,  after conclusion of the oral inquiry and before passing  final  order  a  reference shall be made to the CVO. with the opinion view of the DA.

(iii) There are a substantial number of case in which the Vigilance HQ on receipt of complaint or other  source  information  has  conducted investigation and recommended  initiation  of  disciplinary  proceedings against officials of Group B/C/D cadres. In  such  cases  the  RPFC-1  being the DA issues the chargesheet  and  conducts  the disciplinary proceedings.  It is observed that the view of the CVO is not being sought during final disposal   of   such   disciplinary proceedings.   Tn   all    cases   where   the recommendations  for  initiation  of  disciplinary proceedings  is  given  by Vigilance HQ, the view of the CVO shall  be  obtained  before issuance  of final order by the DA in the matter. The advice of  the CVO shall  also  be kept in view by the Appellate Authority while disposing of appeals in such cases.

The instructions as above shall also apply to disciplinary proceedings in respect of officials in Head Office for whom the RPFC in charge of ASD is the Disciplinary authority and ACC (ASD) is the Appellate Authority.

(Issues with the approval of the CVO) 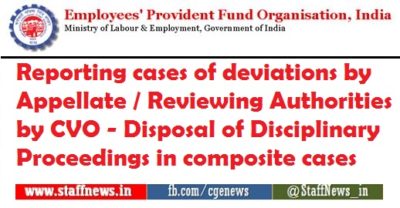