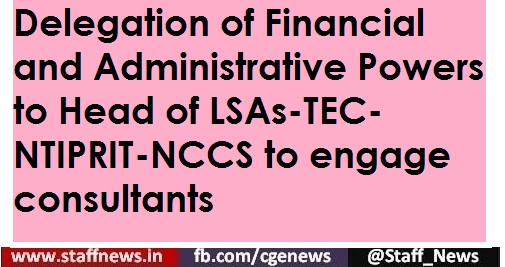 No. 1-50(1)/2018-Estt
Government of India
Ministry of Communications
Department of Telecommunications
(Establishment Wing)

Sub: Delegation of Administrative and Financial powers to the Heads of LSAs, TEC, NTIPRIT and NCCS to engage consultants against vacant posts of Group ‘B’ & ‘C’ — reg.

The undersigned is directed to convey the approval of Secretary (Telecom) for the delegation of administrative and financial powers to the Heads of LSAs, TEC, NTIPRIT and NCCS to engage retired Government servants/ retired officials of PSUs or Research Organizations against the vacant posts of Group ‘B’ & ‘C’ in their respective units.

2. The terms & conditions for hiring of services of the consultants shall be as under:

2.1 The numbers of vacancies that may be filled up through engagement of consultants shall be restricted to 30% of total vacancies of Group ‘B’ & “C’ posts in the respective units.

2.2 The consolidated fee/ remuneration payable to retired person(s) engaged as consultant on short term contract basis shall be restricted to the difference between last pay drawn (as per 7th CPC) by the retired official and basic pension plus DA at the rate applicable for central Government employees from time to time. The person so engaged shall not be eligible for other allowances and benefits. The payment will be made on monthly basis.

2.3 The income tax or any other Tax liable to be deducted as per the prevailing rules will be deducted at source before effecting the payment for which the Department will issue TDS certificate.

2.4 The engagement of retired personnel on short term contract basis as consultants may be resorted to only after other efforts have been exhausted viz. filling of vacancies through deputation etc.

2.5 The retired person(s) shall be appointed/ engaged on a short term contract basis initially for a period of six months. Based on his/her performance and requirement of his/her services, the contract can be further extended upto a maximum of six terms (six months each) or sixty five years of age whichever is earlier. The assessment of Head of respective unit shall be final in this regard.

2.6 Candidates should not be more than sixty five years of age on the date of his/her engagement.

2.8 The respective DoT Units would notify their requirement through official website of that unit and the local office notice board and invite applications from the retired personnel interested in taking up of short term contract.

2.9 A three-member committee under the chairmanship of the Head of respective unit would be formed to go through the applications received and draw a panel for the cadre. The empanelled list will be put up on the website. The panel can be operated by the Heads of other units as per requirement of these units and shall be valid for a period of six months.

2.10 Hiring of consultants may be done through GeM.

2.11 The engagement of retired personnel in short term contract basis can be terminated by either of the party with prior notice of 30 days.

2.12 These units shall forward quarterly statement to DoT HQs so as to reach the HQ by 10th of subsequent month following each quarter, showing number of consultants engaged during the quarter.

2.13 Any exception to the criteria mentioned above for engagement of retired personnel on short term contract basis shall require prior approval of DoT HQs.

2.14 The expenditure on this account is to be booked under the head Professional Services.

Copy for information to: 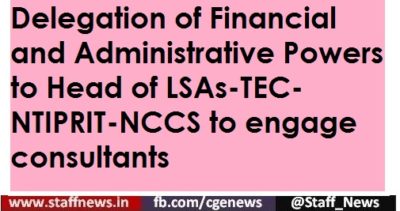