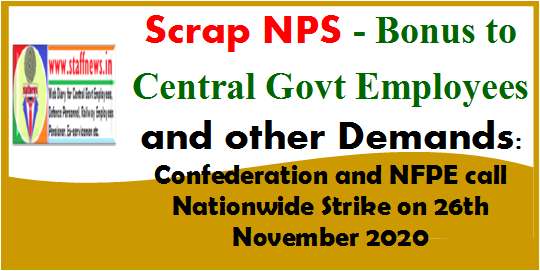 The entire working class of India will go on one day nationwide strike on 26 November 2020. Confederation of Central Govt Employees and Workers and National Federation of Postal Employees (NFPE) has decided to join the strike as we are a constituent organisation of National Platform of Central Trade Unions and Independent Federations. Not only that, most of the issues raised in the common charter of demands are our own issues. The demands raised are mainly issues affecting the life and livelihood of workers, peasants , unorganised workers and the jobless youth of our country. Confederation and NFPE has decided to organize the strike on 26 November 2020, mainly on our own Charter of demands, in addition to the common Charter of demands of the working class and peasants. Strike notice will be served on 27 October 2020 (see Confederation circular and charter of demands published elsewhere).

Eventhough Central Government started implementation of neo-liberal reforms from 1991 onwards , the BJP-led Government from 2014 onwards, intensified vigourous implementation of the right-extreme neo-liberal. Policies of naked privatisation and dismantling of Public sector and Government departments. The privatisation of Telecom , which was a Central Government Department , initiated during the Congress regime is almost completed during the period from 2014 onwards. As a result, BSNL which was making a profit of 10000 crore profit in 2000 has become a loss making entity and lakhs of workers are sent out on voluntary (compulsory) retirement scheme. In the Defence sector , Foreign Direct Investment (FDI) is raised from 49 per cent to 74 per cent and Government declared that 41 ordnance factories will be corporatised (and then privatized). In this process, just like Telecom, thousands of Defence Employees will become surplus and will be sacked unceremoniously.

In the Postal department, India Post Payment Bank (IPPB), a public limited company , started functioning. Proposal for Corporatisation of Postal life Insurance and Rural Postal life Insurance is pending approval of Cabinet. It may happen any time. Conversion of existing Parcel Directorate into a separate company is in the pipeline. Most of the counter work now done by Postal Employees such as booking of registered and speed post articles , money orders , acceptance of all Savings Bank deposits etc are going to be handed over to a Public Limited Company called “Common Service Centre (CSC). If all the above reforms are completed, thousands of Postal Employees will become surplus and their job security will be in danger.

The situation in other Central Govt Departments is also more or less similar. Railways are on fast-track privatisation. More than 150 private trains are going to be commissioned shortly and the process of long term leasing out of Railway stations, Railway lands along with large scale outsourcing of the work presently performed by Railway employees is already in progress. Alongwith Railway Printing presses, Government has decided to close down 12 out of 17 Government of India printing presses also. Postal Printing Press (PPP) in Bhubaneswar is already closed. Postal Stores Depots and Circle Stamp Depots are ordered to be merged and closed. During the Covid-19 pandemic period, Government has declared unbriddled privatisation of all strategic sectors including Space Research (ISRO), Atomic Energy, Defence production etc.

The refusal of the Central Government to honour the assurance given by Group of Ministers headed by Shri Rajnath Singh , then Home Minister , to increase Minimum Pay and Fitment Formula , rejection of our demand to scrap Contributory Pension Scheme (NPS) and restore Old Pension Scheme (OPS) and also to grant 50 per cent of last pay drawn as Minimum Pension , refusal to grant Civil Servants Status and Pension based on entire past services to Gramin Dak Sevaks , non-consideration of the demand for one time Regularisation of all Casual and Contract Workers , refusal to relax 5 per cent condition on compassionate appointments , increasing attacks on Trade Union rights — are all part of this extreme neo-liberal policies pursued by the Central Government.

Freezing of Dearness Allowance and Dearness Relief of Employees and Pensioners and impounding of arrears upto 30.06.2021 in the name of Covid-19 crisis is another blow to the Central Government Employees and Pensioners. The special package of Festival advance and Cash payment in lieu of Leave Travel Concession (LTC) is nothing but a hoax. To get 1/3rd we have to spend 2/3rd from our pocket that too on 12 per cent GST items. Bonus declaration is unduly delayed and Government is not disclosing its mind. To terrorise the employees, strict implementation of the draconian FR 56(j), FR 56(l) and Pension Rules 48 are ordered.

In short, Central Govt Employees in general and Postal Employees in particular, are facing very very serious challenges and crisis, never faced in the past, due to the ruthless policies of the Central Government. Our Job security, Wage structure including DA formula, Social Security ie; pensionery benefits and Trade Union rights are under severe attack. How to overcome this situation? How to protect the hard-won benefits of the employees which are the fruits of the struggles and sacrifices made by thousands of workers and leaders in the past? The answer is that, the Central Government Employees, especially the Postal Employees who are a bigger and more militant force, should be ready for uncompromising struggle and for more sacrifices than the sacrifices of our earlier leaders and ordinary workers at grass root level. Benefits, wages and service conditions which are the products of bitter struggles of the past, can be protected through still bigger and more militant struggles only. This is what history taught us. There is no short-cut. There is no substitute for struggle for existence. There is only two options left before us — either fight or perish.

Let us not surrender like cowards. Let us stand up and fight. Make the 26th November 2020 one day strike a resounding success.

Strike for our own survival

Strike to protect our dignity and self-respect.

Loading...
Newer Post
De-empanelment of Shalby Hospital Jabalpur due to breach of MOA- Refusal for admission and not Providing cashless facilities to CGHS pensioner beneficiaries
Older Post
Head Constable Level 4 and Level 3 Recruitment Rules 2020 in the National Disaster Response Force under the MHA