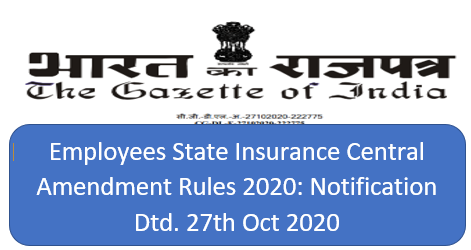 MINISTRY OF LABOUR AND EMPLOYMENT
NOTIFICATION

G.S.R. 675(E).—Whereas a draft containing certain rules further to amend the Employees’ State Insurance (Central) Rules, 1950 were published in the Gazette of India, Extraordinary, Part-II, Section 3, Sub-section (i), vide number G.S.R. 949(E), dated the 24th December, 2019, as required by sub-section (1) of section 95 of the Employees’ State Insurance Act, 1948 (34 of 1948), inviting objections and suggestions from all persons likely to be affected thereby before the expiry of a period of thirty days from the date on which the copies of the Official Gazette containing the said notification was published were made available to public;

And whereas, the copies of the said Official Gazette were made available to the public on the 24th December, 2019;

And whereas, objection or suggestion received from different organisations in respect of the said draft rules have been considered by the Central Government;

1. (1) These rules may be called the Employees’ State Insurance (Central) Amendment Rules, 2020.