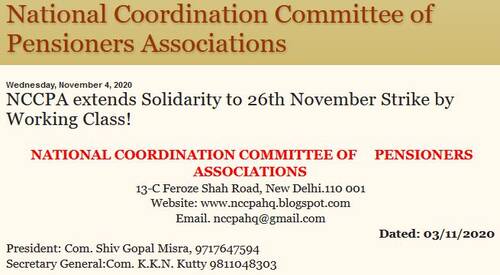 The National Sectt. of the NCCPA met on 2nd November, 2020 through video network at 3.00PM. The meeting was presided over by the National President, Com. Shiv Gopal Misra,.

The meeting was convened to discuss the following agenda:

1. Support and solidarity action for the one day general strike call of the Working class;
2. Any other issue of importance with the permission of the President.

1. The members who participated in the discussions were unanimous of the opinion that the NCCPA must support the strike action as the anti-worker policy of the Government was responsibile for the decision to deny the dearness relief to pensioners for 18 months and the recent one to change the base year for the computation of the Consumer price index. The meeting noted with concern that there had been no consultation with the trade unions or the employees representatives, when the government takes decision concerning the service matters of the workers. The meeting also inter alia took note of the serious and unabated spread of corona virus covid 19 in the country and the difficulties to be encountered by the senior citizens.

The consequent decision of the Government to restrict mobility especially of senior citizens have made them to be virtually under house arrest. Despite the intense desire to be a participant in the struggles, the meeting noted that the imposed restrictions and the non- availability of public transport in certain areas will constrict them from participating in assembly of people. The genuine apprehension of being a victim of the deadly pandemic was also expressed at the meeting. Taking all those into account, the meeting decided to call upon its affiliate and state units:

(a) To organise sit in dharna or demonstration programme on 25.11.2020 with as many number of comrades as could be mobilised in all important urban agglomerations and State capitals and at the end of the programme send the following message to Ms. Nirmala Seetharaman, Finance Minister, Government of India, North Block, New Delhi through e mail.

Text of the message:

Dear Madam, We support the one day general strike of the working class in the country and request you to settle the issues they had projected. We also request you to kindly concede the following important demands of the pensioners urgently;

(a) Release the Dearness Relief impounded;

(b) Implement Option No. 1 of pension fitment formula as third option.

(d)Implement the pension revision from 1.1.2017 to BSNL pensioners;

(e) Revise the pension of PNB Pensioners without further delay;

* Those who could not attend the dharma / demonstration programme due to difficulty of travel etc, may send the above message by e mail to the finance minister on 25th November 2020

(b) Ensure that the wall posters, play card etc. are exhibited at the dharma venue depicting that NCCPA support for the one day general strike on 26th November, 2020

(c) It was also decided that the NCCPA CHQ will issue a press Statement in support of the strike. The same will be placed on our website as also conveyed to all affiliates and State Committees through NCCPA WhatsApp Group.

The demand for festival grant or advance was raised and the President was requested to take up the issue with the Finance Secretary. Com. President said that the workers have not appreciated the conditions imposed by the Government for the festival advance. Demanding the advance will amount to acceptance of the same conditions, which would make it worthless. However, he agreed to take up the issue of festival grant for the pensioners as a special case in view of the pandemic.

Com. V.A. N. Namboodiri, who had to leave the meeting halfway due to technical problems wanted the NCCPA to ask the Railways to rescind their decision to withdraw the Senior Citizen Facilities.

The NCCPA will forward a resolution in the matter to the Railway Board Chairman.

The copy of the Press Statement and the resolution demanding restoration of the senior citizen facilities will be sent to you separately. 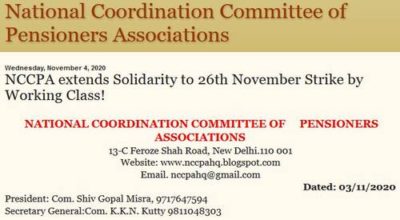