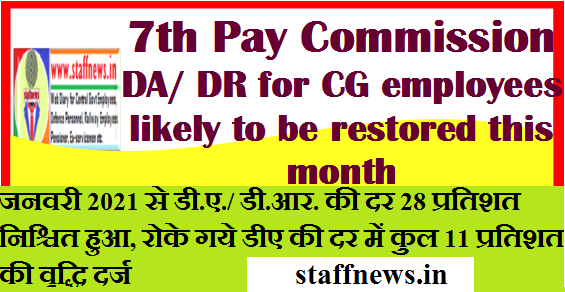 New Delhi, Jan 11: With economic activities across the country seeing improvement, Central Government are likely to get some good news with regards to the 7th Pay Commission.

Several reports say that the wait for the Dearness Allowance (DA) hike could get over sooner than expected. The DA is likely to be restored this month itself reports have said. This is expected to take effect in January 2021 itself and this would in accordance with the accepted formula that is based on the recommendations of the 7th Pay Commission.

In March 2020, the Union Cabinet chaired by Prime Minister, Narendra Modi had approved to release an additional instalment of DA to the CG employees and Dearness Relief to pensioners with effect from January 1st 2020.

This would benefit around 48.34 lakh CG employees and 65.26 lakh pensioners.

In another development relating to the 7th Pay Commission, the government decided to extend the Disability Compensation for all serving employees.

Payment of Dearness Allowance to Central Government employees and DR to pensioners at current rates: Confederation writes to FM

This decision would go a long way and especially provide relief for those in the central armed police force (CAPF), personnel of the BSF, CISF, BSF etc.

“In a significant New Year decision, “Disability Compensation” has been extended for all serving govt employees, if they get disabled while performing their service & are still retained in service. This also includes those who were appointed on or after 1.1.2004 & covered under NPS,” Union Minister, Jitendra Singh said.

“In a significant New Year decision, “Disability Compensation” has been extended for all serving govt employees, if they get disabled while performing their service & are still retained in service. This also includes those who were appointed on or after 1.1.2004 & covered under NPS,” Union Minister, Jitendra Singh said.

The decision relating to the NPS would also benefit employees and provide ease of living for government servants even after they have superannuated and become pensioners or family pensioners or elder citizens, he also said.

The 2009 order said that those government servants appointed on or after January 1 2004 and covered under the National Pension Scheme (NPS) do not get such compensation.