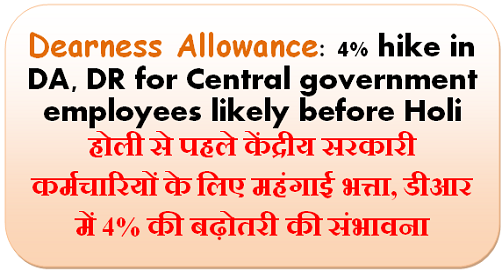 7th Pay Commission Latest News: Apart from this, the government is also expected to announce a hike in dearness relief (DR) which is expected to benefit over 65 lakh, central government pensioners.

New Delhi: The Modi government is mulling to implement the hike in Dearness Allowance (DA) and Dearness Relief (DR) for over 1 crore employees of the Central Government before Holi, next month. This will come as a double dose of happiness for the central government employees, who are waiting for the hike for the last few months.

Apart from this, the government is also expected to announce a hike in dearness relief (DR) which is expected to benefit over 65 lakh, central government pensioners.

Media reports also suggest that the government is mulling to provide 4 per cent arrears also, which will increase the DA to 25 per cent. However, no official announcement has been made yet. The increase in dearness allowance is likely to be in accordance with the accepted formula, based on the recommendations of the seventh Central Pay Commission.

The government has issued a directive in the budget regarding the pension of those children/siblings of deceased government servants/pensioners who are mentally or physically disabled. If the total family eligible family pension is less than 30 per cent of the last salary drawn by the deceased government servant/pensioner, then they will be eligible for a family pension for the whole life. They will also be eligible for dearness relief.