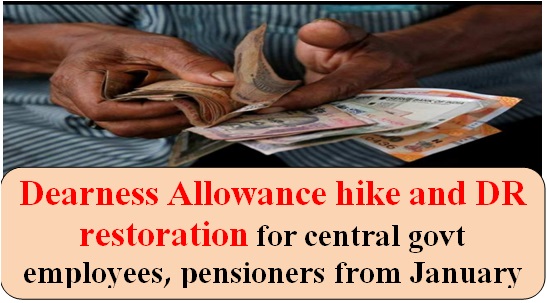 Over 1 crore central government employees – 48 lakh workers and around 65 lakh pensioners – are set to get a double-dose of good news in the face of hike in dearness allownace and restoration of dearness relief.

According to media reports, the first is a 4 per cent hike in dearness allowance from this month which means that more salary will be credited to the accounts of central government employees.

The 4 per cent hike will increase the DA from the current 17 per cent to 21 per cent. However, an official announcement from the government about the date when the additional hike will be introduced is still awaited.

The Union Cabinet had, in March 2020, approved the release of additional instalment of DA to central government employees and Dearness Relief (DR) to pensioners with effect from January 1, 2020.

The finance ministry had then informed that there will be an increase of 4 per cent over the existing rate of 17 percent of the Basic Pay/Pension, to compensate for price rise.

The Union Cabinet had also approved the release of DR (Dearness Relief) to the retired pensioners with effect from 1st January 2020.

Payment of Dearness Allowance to Central Government employees and DR to pensioners at current rates: Confederation writes to FM

The dearness allowance is given to the central government employees to help them bear with their expenses keeping inflation in mind. It is announced twice a year, first instalment from January to June and the second one from July to December.

Loading...
Newer Post
Provision of vaccine for the Railway Employees: AIRF writes to Railway Board
Older Post
Implementation of orders relating to promotion of officers in various grades in CSSS: DoP&T OM