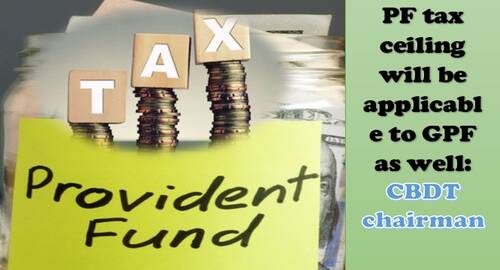 PF tax ceiling will be applicable to GPF as well: CBDT chairman

PF tax ceiling will be applicable to GPF as well: CBDT chairman

“Everybody is covered, even GPF [General Provident Fund]. This is also applicable to government officials, including me. The law is equal for everybody,” Mody said.

According to the Central Board of Direct Taxes chairman, the new provision, which will be applicable for contributions made from April 1, 2021, would not affect most provident fund subscribers. “If we see total number of beneficiaries in this [PF] segment, then most of them are within the ₹2.5 lakh limit. Only a small section of taxpayers makes annual contributions above ₹2.5 lakh,” he said.

“You must also see from the other perspective that there are cases where contributions are very high… There must be some differentiation for such contributors,” he added.

The government is yet to notify the way interest will be computed, said Naveen Wadhwa, deputy general manager at Taxmann, an online source of research on tax matters:

“Possibly, the obligation to compute the interest shall be on the EPFO and it will be subject to TDS [tax deducted at source] under Section 192A or 194A,” he said.

“The Finance Bill 2021 has proposed to tax the interest accrued on statutory provident fund and recognised fund to the extent it relates to the contribution made by an employee in excess of ₹2.5 lakh the previous year. Such interest should be charged to tax under the head ‘Other Sources’ [of income], at the applicable slab rates, based on the method of accounting regularly followed by the assessee,” he said

A provident fund expert said on condition of anonymity that most employees contributing more than ₹2.5 lakh annually will fall under the 30% tax slab, which would significantly reduce returns from the retirement fund.

“This will force high income people to look for other investment options such as the equity market or New Pension Scheme,” he said.

On direct tax collection, Mody expressed confidence that the ₹9.05 lakh crore target, as per the revised estimate (RE) for 2020-21, will be achieved.

“There was a lull in economic activities due to the [Covid-19] pandemic, which is now over. Things are normal now. The gap [in revenue collection] that was there in the last three months has narrowed to almost a single digit. My net collection as on date is ₹6.64 lakh crore, and this is after giving 7% more refunds [compared to the previous year],” he said.