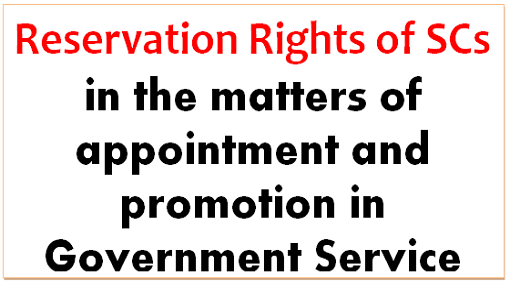 GOVERNMENT OF INDIA
MINISTRY OF SOCIAL JUSTICE AND EMPOWERMENT

D. Ravikumar
Will the Minister of

Will the Minister of SOCIAL JUSTICE AND EMPOWERMENT be pleased to state:
(a) whether the Government has any proposal to amend the Constitution to make reservation to Scheduled Caste(SC) people as one of their fundamental rights;
(b) if so, the details thereof and if not, the reasons therefor;

(c) whether the Supreme Court has again and again reiterated that reservation is not a fundamental right; and
(d) if so, the details of the action taken by the Union Government to protect the reservation rights of SC people?

(a) to (d): Provisions already exist in the Constitution which protect the interests of SCs and STs, especially in the matters of appointment and promotion in Government Service. Article 16 (4) allows the State to make provision for the reservation of appointments or posts in favor of any backward class of citizens, which, in the opinion of the State, is not adequately represented in the services under the State. Further, Government has taken several steps for protection of the interests of SCs and STs in the matter of promotion in services under the Government. Vide the 77thAmendment, clause 16(4A) was inserted in the Constitution allowing reservation in promotion for SCs and STs in Government service. Through the 81st Amendment, Article 16(4B) was inserted providing carry forward of unfilled reserved vacancies from previous years. Vide the 82ndAmendment, proviso was inserted in Article 335 of the Constitution allowing the Government to relax the qualifying marks or lowering the standard of evaluation for reserved candidates in matters of promotion to members of SC and ST. Through the 85th Amendment, Article 16 (4A) was amended to provide the consequential seniority to the SCs and STs in the matters of promotions. In ‘Nagaraj’ case, validity of all the above Constitutional amendments was challenged. While upholding their validity, the Hon’ble Supreme Court held that if the State wishes to make reservation in promotion, it has to collect quantifiable data showing backwardness of the class, inadequacy of representation of that class in public employment, ensure compliance of Article 335 and see that reservation does not breach the ceiling limit of 50% or obliterate the creamy layer or extend the reservation indefinitely. However, in the SLP (Civil) No. 30621 of 2011, titled ‘Jarnail Singh & Others Vs Lachmi Narain Gupta & Others’, the Hon’ble Supreme Court, vide Judgment, dated 26.9.2018, held the conclusion in ‘Nagaraj’ case that the State has to collect quantifiable data showing backwardness of the SCs and STs as invalid, it being contrary to the Judgement of the nine-Judges Bench in ‘Indra Sawhney’.

In the Civil Appeal No.1226 of 2020, in Mukesh Kumar &Anr. Vs. The State of Uttarakhand &Ors, the Hon’ble Court held that the State Government was not bound to make reservations, and that there is no fundamental right which inheres in an individual to claim reservation in promotions. Further, in the Civil Appeal No.3240 of 2011, in the matter, titled ‘Pravakar Mallick &Anr. Vs. The State of Orissa & Ors’the Resolution dated 20.3.2002 of the State Government providing consequential seniority to the reserved candidates was quashed by the Hon’ble Supreme Court on the ground that it was not Nagaraj compliant. The issue of litigation in both these cases pertains to the services of employees of the State Government which fall under List II i.e. “State List”of the Seventh Schedule of the Constitution and the Government of India was not party to these litigations.

Insofar as the Central Government is concerned, it has filed an SLP before the Hon’ble Supreme Court against the Judgement, dated 23.8.2017, of the Hon’ble Delhi High Court in the case titled, ‘All India Equality Forum & Ors vs. UOI&Ors’, in which the Hon’ble High Court quashed DoPT OM, dated 13.8.1997, which provided for reservation in promotions. This SLP has been tagged with SLP No.30621/2011, titled ‘Jarnail Singh and Ors Vs Lachhmi Narain Gupta & Others’, and the said case is presently subjudice along with about 130 other tagged cases which are similar in nature.