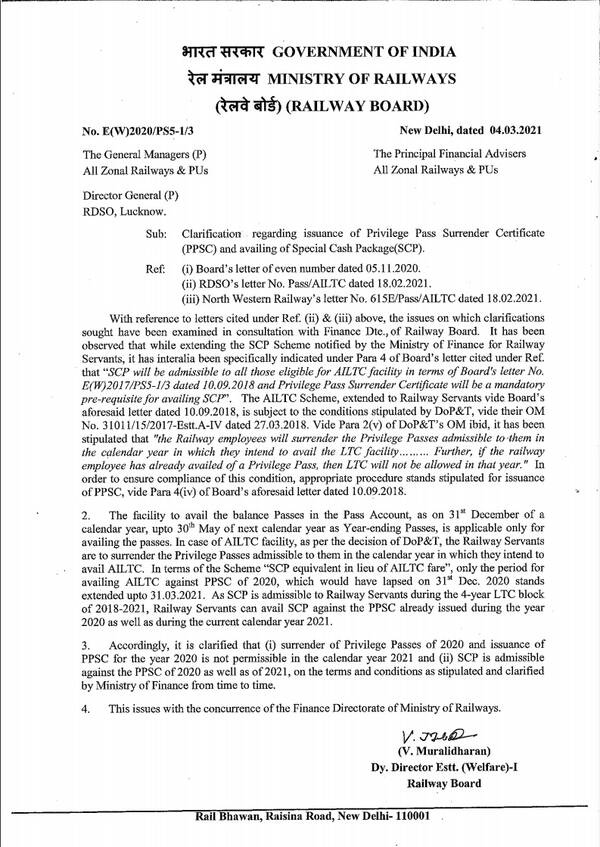 Clarification regarding issuance of Privilege Pass Surrender Certificate and availing of Special Cash Package(SCP) in lieu of LTC: Railway Board Order dated 04.03.2021

Special cash package equivalent in lieu of Leave Travel Concession fare during the Block 2018-2021: Points to be adhered to while submitting the LTC claims
Issuance of Privilege Pass Surrender Certificate PPSC and availing of Special Cash Package – IRTSA seeks clarification from Railway Board
Disbursement of Salary for the month of September, 2017: CGA’s Order

Clarification regarding issuance of Privilege Pass Surrender Certificate (PPSC) and availing of Special Cash Package(SCP) in lieu of LTC: Railway Board Order dated 04.03.2021

With reference to letters cited under Ref. (ii) & (iii) above, the issues on which clarifications sought have been examined in consultation with Finance Dte.,of Railway Board. It has been observed that while extending the SCP Scheme notified by the Ministry of Finance for Railway  Servants, it has interalia been specifically indicated under Para 4 of Board’s letter cited under Ref. that “SCP will be admissible to all those eligible for AILTC facility in terms of Board’s letter No. E(W)2017/PS5-1/3 dated 10.09.2018 and Privilege Pass Surrender Certificate will be a mandatory pre-requisite for availing SCP”. The AILTC Scheme, extended to Railway Servants vide Board’s aforesaid letter dated 10.09.2018, is. subject to the conditions stipulated by DoP&T, vide their OM No. 31011/15/2017-Estt.A-IV dated 27.03.2018. Vide Para 2(v) of DoP&T’s OM ibid, it has been stipulated that “the Railway employees will surrender the Privilege Passes admissible to-them in the calendar year in which they intend to avail the LTC facility……… Further, if the railway employee has already availed of a Privilege Pass, then LTC will not be allowed in that year.” In order to ensure compliance of this condition, appropriate procedure stands stipulated for issuance of PPSC, vide Para 4(iv) of Board’s aforesaid letter dated 10.09.2018.

2. The facility to avail the balance Passes in the Pass Account, as on 31st December of a calendar year, upto 30th May of next calendar year as Year-ending Passes, is applicable only for availing the passes. In case of AILTC facility, as per the decision of DoP&T, the Railway Servants are to surrender the Privilege Passes admissible to them in the calendar year in which they intend to avail AILTC. In terms of the Scheme “SCP equivalent in lieu of AILTC fare”, only the period for availing AILTC against PPSC of 2020, which would have lapsed on 31% Dec. 2020 stands extended upto 31.03.2021. As SCP is admissible to Railway Servants during the 4-year LTC block of 2018-2021, Railway Servants can avail SCP against the PPSC already issued during the year 2020 as well as during the current calendar year 2021.

3. Accordingly, it is clarified that (i) surrender of Privilege Passes of 2020 and issuance of PPSC for the year 2020 is not permissible in the calendar year 2021 and (ii) SCP is admissible against the PPSC of 2020 as well as of 2021, on the terms and conditions as stipulated and clarified by Ministry of Finance from time to time.

4. This issues with the concurrence of the Finance Directorate of Ministry of Railways. 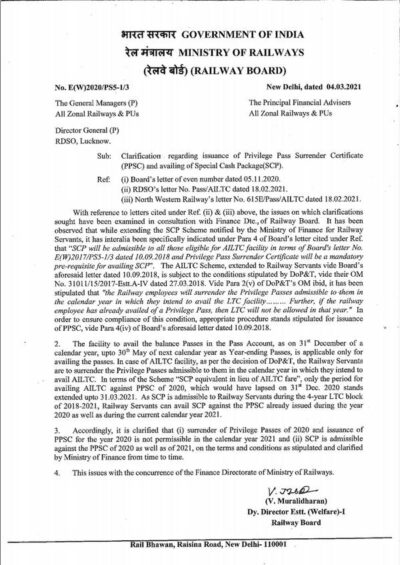