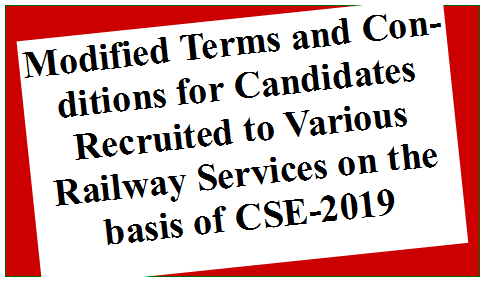 All the candidates are directed to inform   their option through a mail (mail ID: [email protected]) with a signed letter (attached as a PDF file ) addressed to the Director General, NAIR, Vadodara by 15th April 2021, positively. Probationers  who opt to avail EoL need not to report at NAIR on 26.04.2021 and necessary  sanctioning/approval for their EoL will be communicated to them by the concerned  CTI.

The probationary training of probationers of different Group  ‘A’ services has been centralized with the Centralised Training Institutions as under:

Ministry of Railways has decided that the Probationary training of probationers of Group ‘A’ services of all departments excepting IRHS would be 78 weeks. The period of probation, probation on training against working post would be as under:-

The period of probation may be extended at the discretion of the Government.

The exemption in (b) above will also apply to the probationers who have been permitted to take special examination in the circumstances mentioned in (a) above.

If a Probationer fails to pass second examination (b) above his/ her services are likely to be terminated.

4. Refund of Cost of Training:

If for any reasons which in the opinion of the Government are not beyond the control of the Probationers, a Probationer wishes to withdraw from training or probation he/she shall be liable to refund the any money paid to him, including pay and allowances, travelling expenses to join appointment and all expenses that shall or may have been incurred by the Central Government for the probationary training. For this purpose he/she will execute a bond as in the prescribed proforma. The Probationers permitted to apply for appointment to Indian Administrative Service, Indian Foreign Service etc. will not, however, be required to refund the cost of the training.

5. Termination of appointment during probation:

The probationers will be confirmed  in Junior Scale after having successfully passed all the examinations prescribed after completion of institutional training as well as posting examination and confirmation test now being prescribed in lieu of Departmental examination at the end of probation against working post.

7. Determination  of Seniority of Group ‘A’ Probationers  of different services in Junior Scale after their confirmation.

The Probationers will be eligible for free Railway passes and Privilege Ticket Orders in accordance with the rules in force from time to time.

The probationers will be posted to the zonal Railway as will be intimated later. A probationer will ordinarily be employed throughout his service on the Railway to which he/she has been  posted. The Ministry of Railways, however, reserve their right to require him/her to serve on any other Railway or Project in or out of India.

Under the rules, a person having more than one spouse living or a  woman  whose marriage is void by reason of her husband having a wife living at the time of such marriage, is not eligible for appointment to the Railway Service. The Government of India, may, however, if satisfied that there are special, grounds for doing so, exempt any person from the operation of this provision. The offer of appointment is, therefore, conditional on the candidate’s signing a declaration in the form enclosed and submitting the same to the General Manager of the Railway to which he/ she has been posted/ posted for training. In case the candidate does not satisfy this condition and wishes to be exempted from the operation of this provision, he/ she shall furnish the full facts of this case to the Ministry of Railways immediately to enable the Government to take decision in the matter.

13. Liability to serve the Defence Services.

14. The Probationer will be governed in respect of all matters, whether specifically provided for herein or otherwise by the Recruitment Rules for the respective Railway Services and the provisions of the Indian Railway Codes and other extant orders as issued/amended from time to time.

“… … … …..The matter has been examined in consultation with the UPSC and it has been decided to reduce from nine months the maximum time up to which an offer of appointment can be kept open. In other words, an offer of appointment should clearly specify the period (which shall not normally exceed one or two months) after which the offer would lapse automatically if the candidate did not join within the specified period If, however, within the specified period, a request is received from the candidate for extension of time, it may be considered by the Ministries/Departments but extension beyond three months should not be granted liberally and it may be granted only as an exception where facts and circumstances so warrant and in any case only up to a maximum of six months from the date of issue of the original offer of appointment. An offer of appointment would lapse automatically after the expiry of six months from the date of issue of offer of appointment”.

Revision of channels of Promotion (AVC) of various categories of Medical Department: Railway Board Order RBE No. 178/2019