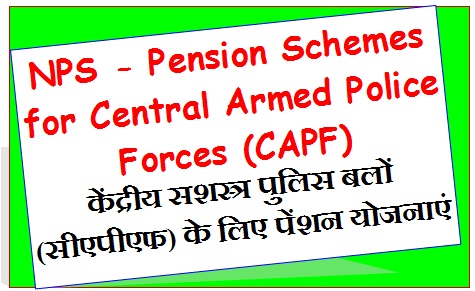 Will the Minister of HOME AFFAIRS be pleased to state:

(b) if so, the details of pension schemes available to them;

(f) the steps Government has taken to familiarise CAPF personnel with rules and regulations of the NPS?

(a) & (b): All new entrants who joined the Central Government service with effect from 01.01.2004 except the Armed Forces, are covered under the new restructured Defined Contribution Pension System (commonly known as New Pension Scheme) which replaced the previous system of  R.S.US.Q.NO.3258 FOR 24.03.2021

Defined Benefit Pension System. The personnel who joined prior to the aforesaid date continue to be governed by the pension scheme under the Central Civil Services (Pension) Rules, 1972.

(c) & (d): As per circular issued by the Pension Fund Regulatory & Development Authority (PFRDA),the withdrawal shall be allowed if the following eligibility criteria and limit for availing the benefits are complied with by the subscriber:-

i. the subscriber shall have been in the National Pension System at least for a period of three years from the date of his or her joining;
ii. the subscriber shall be permitted to withdraw accumulations not exceeding twenty-five per cent of the contributions made and standing to his or her credit in individual pension account, as on the date of application for withdrawal.

The subscriber shall be allowed to withdraw only a maximum of three times during the entire tenure of subscription under the National Pension System.

(e): Presently, the NSDL e-Governance Infrastructure Limited, acting as Central Record keeping Agency for handling Government sector subscribers is entitled to collect transaction charges of Rs.3.75 out of the NPS account of the subscriber, for providing services of partial-withdrawal or withdrawal upon resignation/superannuation. The charges are borne by the Central Government for its employees.

(f): PFRDA in close coordination with the Ministry of Home Affairs has conducted workshops/seminars at various locations and the same have been attended by the officials of the CAPFs. During the said sessions, the participants are advised in respect of various rules and regulations under NPS.