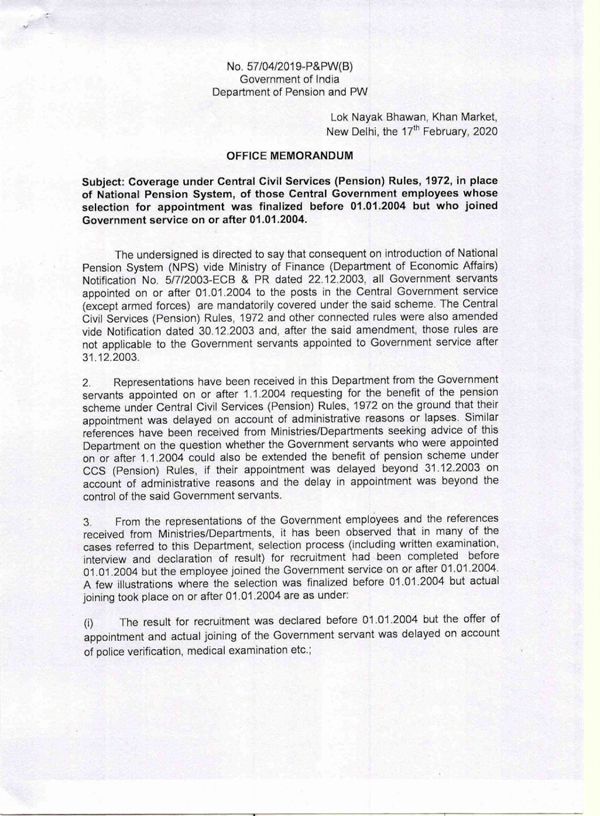 Subject: Coverage under Central Civil Services (Pension) Rules, 1972, in place of National Pension System, of those Central Government employees whose selection for appointment was finalized before 01.01.2004 but who joined Government service on or after 01.01.2004.

The undersigned is directed to say that consequent on introduction of National Pension System (NPS) vide Ministry of Finance (Department of Economic Affairs) Notification No. 5/7/2003-ECB & PR dated 22.12.2003, all Government servants appointed on or after 01.01.2004 to the posts in the Central Government service (except armed forces) are mandatorily covered under the said scheme. The Central Civil Services (Pension) Rules, 1972 and other connected rules were also amended vide Notification dated 30.12.2003 and, after the said amendment, those rules are not applicable to the Government servants appointed to Government service after 31.12.2003.

2. Representations have been received in this Department from the Government servants appointed on or after 1.1.2004 requesting for the benefit of the pension scheme under Central Civil Services (Pension) Rules, 1972 on the ground that their appointment was delayed on account of administrative reasons or lapses. Similar references have been received from Ministries/Departments seeking advice of this Department on the question whether the Government servants who were appointed on or after 1.1.2004 could also be extended the benefit of pension scheme under CCS (Pension) Rules, if their appointment was delayed beyond 31.12.2003 on account of administrative reasons and the delay in appointment was beyond the control of the said Government servants.

3. From the representations of the Government employees and the references received from Ministries/Departments, it has been observed that in many of the cases referred to this Department, selection process (including written examination, interview and declaration of result) for recruitment had been completed before 01.01.2004 but the employee joined the Government service on or after 01.01.2004. A few illustrations where the selection was finalized before 01.01.2004 but actual joining took place on or after 01.01.2004 are as under:

(i) The result for recruitment was declared before 01.01.2004 but the offer of appointment and actual joining of the Government servant was delayed on account of police verification, medical examination etc.;

(vi) The result for recruitment was declared before 01.01.2004 but one or more candidates were declared disqualified on the grounds of medical fitness or verification of character and antecedents, caste or income certificates. Subsequently, on review, they were found fit for appointment and were issued offers of appointment on or after 01.01.2004.

In all the above illustrative cases, since the result for recruitment was declared before 01.01.2004, denial of the benefit of pension under CCS (Pension) Rules, 1972 to the affected Government servants is not considered justified.

4. The matter has been examined in consultation with the Department of Personnel & Training, Department of Expenditure and Department of Legal Affairs in the light of the various representations/references and decisions of the Courts in this regard. It has been decided that in all cases where the results for recruitment were declared before 01.01.2004 against vacancies occurring on or before 31.12.2003, the candidates declared successful for recruitment shall be eligible for coverage under the CCS(Pension) Rules, 1972. Accordingly, such Government servants who were declared successful for recruitment in the results declared on or before 31.12.2003 against vacancies occurring before 01.01.2004 and are covered under the National Pension System on joining service on or after 01.01.2004, may be given a one-time option to be covered under the CCS(Pension) Rules, 1972. This option may be exercised by the concerned Government servants latest by 31.05.2020.

5. Those Government servants who are eligible to exercise option in accordance with para-4 above, but who do not exercise this option by the stipulated date, shall continue to be covered by the National Pension system.

6. The option once exercised shall be final.

7. It is clarified, that the above option would be available to only those Government servants who were declared successful for recruitment before 01.01.2004, against vacancies pertaining to the period prior to that date. This option shall, however, not be available to the Government servants appointed on or after 01.01.2004 if they fall in any of the following categories:

(iii) Government servants who were selected against vacancies pertaining to the period prior to 01.01.2004 on the basis of an advertisement/notification issued before 01.01.2004 or a written examination/interview held before 01.01.2004 but results for recruitment were declared on or after 01.01.2004.

(iv) Government servants who joined on or after 01.01.2004 after they were granted extension of joining time on their own request and, in accordance with the instructions issued by the Department of Personnel & Training, their seniority was depressed on account of such extension of joining time to a batch for which the result for recruitment was declared on or after 01.01.2004.

8. The matter regarding coverage under the CCS (Pension) Rules, 1972 based on the option exercised by the Government servant shall be placed before the appointing authority for consideration in accordance with these instructions. In case the Government servant fulfils the conditions for coverage under the CCS (Pension) Rules, 1972, in accordance with these instructions, necessary order in this regard shall be issued latest by 30 September, 2020. The NPS account of such Government servants shall, consequently, be closed w.e.f. 01st November, 2020.

9. The Government servants who exercise option to switch over to the pension scheme under CCS (Pension) Rules, 1972, shall be required to subscribe to the General Provident Fund (GPF). Regarding accountal of the corpus in the NPS account of the Government servant, Controller General of Accounts (CGA) has furnished the following clarification vide letter No. 1(7)(2)/2010/cla./TA III/390 dated 14.11.2019:

i. Adjustment of Employees’ contribution in Accounts: Amount may be credited to individual’s GPF account and the account may be recasted permitting up-to-date interest (Authority-FR-16 &Rule 11 of GPF Rules).

ii. Adjustment of Government contribution under NPS in Accounts: To be accounted for as (-) Dr. to object head 70 – Deduct Recoveries under Major Head 2071 – Pension and other Retirement benefit – Minor Head 911- Deduct Recoveries of overpayment (GAR 35 and para 3.10 of List of Major and Minor Heads of Accounts).

iii. Adjustment of increased value of subscription on account of appreciation of investments — May be accounted for by crediting the amount to Govt. account under M.H. 0071- Contribution towards Pension and Other Retirements Benefits 800- Other Receipts ( Note under the above Head in LMMHA).

10. All Ministries/Departments are requested to give wide publicity to these orders. The cases of those Government servants who fulfil the conditions mentioned in this O.M. and who exercise option to switch over to the pension scheme under CCS (Pension) Rules may be settled by the administrative Ministries/Departments in accordance with these orders.

12. In their application to the employees of Indian Audit and Accounts Department, these orders are issued after consultation with Comptroller and Auditor General of India, as mandated under Article 148(5) of the Constitution. 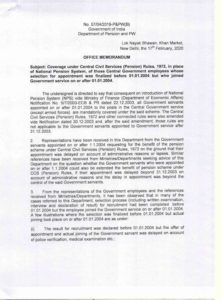 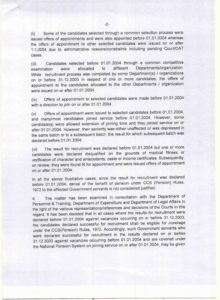 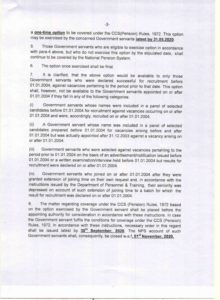 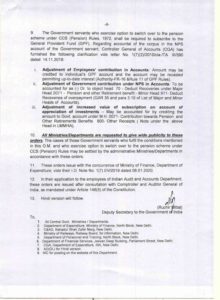