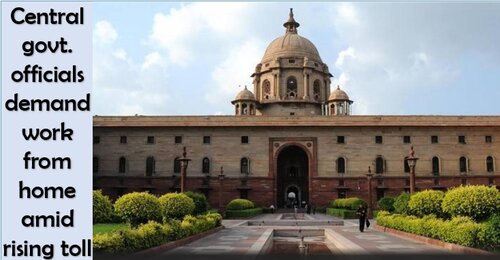 Central govt. officials demand work from home amid rising toll due to Coronavirus

Central govt. officials demand work from home amid rising toll due to Coronavirus

Around 50 government officials across ministries and departments in the national capital have succumbed to COVID-19 in just the past one month, according to a representation sent by the employees’ to the Centre.

The forum representing the officials of the Central Secretariat Service (CSS) has said at least 30 who died were under 40 years.

It demanded that the government organise vaccination camps for all the CSS employees on the lines of front-line workers on a priority.

On May 4, Minister for Personnel, Public Grievances and Pensions Jitendra Singh had tweeted that Department of Personnel and Training (DoPT) is organising a vaccine camp at North Block.

A CSS official however, said such camps were not enough. “North Block comprises the offices of ministries of finance, home and personnel. It [the camp] is barely enough for them. Many fear going to other government buildings to get the shots; this should be held at every government building,” said the official on condition of anonymity.

The Cabinet Secretariat will be organising a vaccination camp at the President’s House on May 17 for those above 45 years and on May 18 for employees in the 18-45 age group.

Read also: Central govt officials may be asked to Work From Home: Report

On April 19, the DoPT asked all central government offices to reduce the strength of under secretary and equivalent ranks to 50% in office. The deputy secretaries have, however, been asked to report daily.

The order has been extended till May 31. Pregnant women, persons with disability and those who live in containment zones have been exempted.

“In the age of digital India, why cannot government employees work from home? Hundreds of those who were infected were going to the office daily, many have died, leaving behind young children. We are demanding work from home as it will not impact productivity,” another CSS official said.

On May 6, the CSS forum tweeted: “It is disheartening that GoI [Government of India] has lost 50+ hard working CSS Officers in the span of just one month….We have requested @DoPTGoI on several occasions vide letters dated 27 & 29 April to implement Work From Home (WFH). In view of the dreadful situations in India and it being the World’s worst hit nation, but due to insensitive behaviour, we are losing the precious jewels of our bureaucracy and hard working officers every day. “

CSS officials provide support and continuity of the governmental system in the Central Government Secretariat and their sanctioned strength is around 23,000. According to DoPT, the CSS has been devised primarily to manage the middle level posts in the Central Secretariat, the headquarters of the Union Government, housing the offices of the central ministries and departments in Delhi.