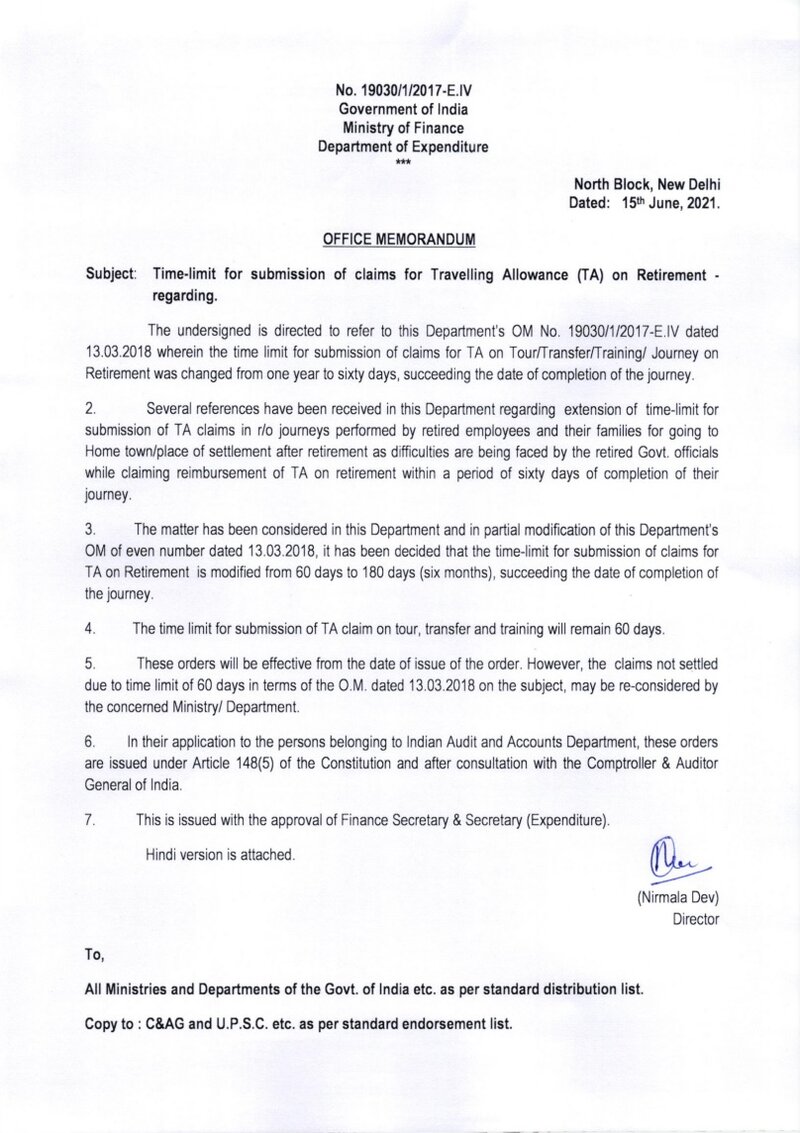 No. 19030/1/2017-E.IV
Government of India
Ministry of Finance
Department of Expenditure

Subject: Time-limit for submission of claims for Travelling Allowance (TA) on Retirement – regarding.

The undersigned is directed to refer to this Department’s OM No. 19030/1/2017-E.IV dated 13.03.2018 wherein the time limit for submission of claims for TA on Tour/Transfer/Training/ Journey on Retirement was changed from one year to sixty days, succeeding the date of completion of the journey.

2. several references have been received in this Department regarding extension of time-limit for submission of TA claims in r/o journeys performed by retired employees and their families for going to Home town/place of settlement after retirement as difficulties are being faced by the retired Govt. officials while claiming reimbursement of TA on retirement within a period of sixty days of completion of their journey.

3. The matter has been considered in this Department and in partial modification of this Department’s OM of even number dated 13.03.2018, it has been decided that the time-limit for submission of claims for TA on Retirement is modified from 60 days to 180 days (six months), succeeding the date of completion of the journey.

4. The time limit for submission of TA claim on tour, transfer and training will remain 60 days.

5. These orders will be effective from the date of issue of the order. However, the claims not settled due to time limit of 60 days in terms of the O.M. dated 13.03.2018 on the subject, may be re-considered by the concerned Ministry/ Department.

6. In their application to the persons belonging to Indian Audit and Accounts Department, these orders are issued under Article 148(5) of the Constitution and after consultation with the Comptroller & Auditor General of India.

7. This is issued with the approval of Finance Secretary & Secretary (Expenditure).