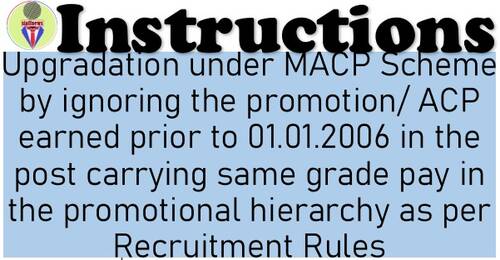 Upgradation under MACP Scheme by ignoring the promotion/ACP earned prior to 01.01.2006 in the post carrying same grade pay

Upgradation under MACP Scheme by ignoring the promotion/ACP earned prior to 01.01.2006 in the post carrying same grade pay in the promotional hierarch

Upgradation under MACP Scheme by ignoring the promotion/ACP earned prior to 01.01.2006 in the post carrying same grade pay in the promotional hierarchy as per Recruitment Rules

No. 4-7/MACPS/2019-PCC
Government of India
Ministry of Communications
Department of Posts

This refers to various references/representations regarding admissibility of the benefit of financial upgradation under Modified Assured Career Progression (MACP) Scheme to Inspector (Posts) / Assistant Superintendent of Posts (ASP) consequent upon upgradation of pay scale of Inspector Posts cadre from Grade Pay Rs.4200/- to Rs.4600/- w.e.f. 01.01.2006 by ignoring the promotion to ASP cadre / 2nd financial upgradations under ACP Scheme earned / granted prior to 01.01.2006 in terms of para-5 of Annexure-I to MACP Scheme issued vide this Directorate OM No. 4-7/(MACPS)/2009-PCC dated 18.09.2009.

2. In this regard , it is informed that although vide this Directorate OM of even No. dated 10.02.2021, it was clarified that “promotion earned in the post carrying same grade pay in the promotional hierarchy as per Recruitment Rules shall be counted for the purpose of MACPS in terms of para -8 of Annexure -I to DoP&T OM dated 19.05.2009” yet the point of reference has again been referred to Department of Personnel & Training seeking clarification on the issue.

3. Meanwhile, the competent authority has decided that until clarification from DoP&T on the issue is received, no order for grant of MACP to IP/ASP by ignoring the promotion to ASP cadre / 2nd financial upgradations under ACP Scheme earned / granted prior to 01.01.2006 in terms of para-5 of Annexure-I to MACP Scheme shall be issued or implemented, if already issued.

4. It is therefore, requested to bring these directions to the notice of all concerned immediately and ensure strict adherence in true spirit.

As per standard list.
CGM, CEPT for uploading the order on the India Post web site under Establishment subject.
Guard File. 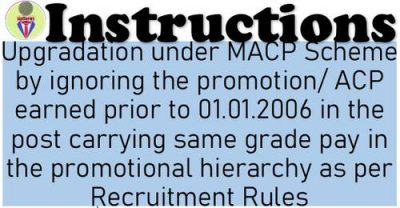 Loading...
Newer Post
Submission of Annual Life Certificate for pensioners/family pensioners living abroad: DoP&PW OM dated 22.09.2021
Older Post
Alteration in date of birth should not be made just before the retirement – Supreme Court Judgement – Civil Appeal No. 5720-5721 of 2021