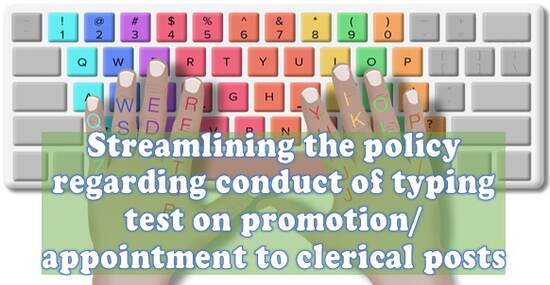 Conduct of typing test on promotion/appointment to clerical posts: Streamlining the policy

Sub: Streamlining the policy regarding conduct of typing test on promotion/appointment to clerical posts.

1. In order to streamline the process of conducting typewriting tests, following guidelines are issued for implementation over SECR.

I. In terms of instructions contained in Estt Rule No. 62/2000, at least. three typewriting tests will be arranged for persons recruited/promoted to clerical posts within a period of two years from the date of promotion/recruitment on provisional basis with a gap of six months between the tests.

1.2 In continuation of the each typing test conducted as above, a supplementary typewriting test shall be conducted after one week from the date of main typing test for those who could not appear in the main test due to genuine reason on similar lines as that for selection/suitability in terms of para 223 of IREM-I . However, if a candidate remain absent without valid reason, it will be deemed that he/she has availed a chance. Date time and venue of supplementary test shall invariably be mentioned in the notification issued for main typewriting test. As far as possible, the supplementary test shall be ‘conducted by the same committee who has conducted the main test. Not more than one supplementary test should normally be held to cater to the needs of absentee due to genuine reason.

1.3. If an employee could not appear due to administration’s failure to relieve him in time for attending the test or sickness (covered by a specific certificate from the Railway Medical Officer) or other reason over which the employee has no control, the same shall be treated as valid reason. However, decision of the competent authority shall be final in this regard as well as cases other than above mentioned.

View: Exemption from passing the Typewriting Test on Computer in respect of LDC: DoPT&T’s clarification

1.4 It shall be duty of the employee concerned to avail three chances within two years of his/her promotion/recruitment. If an employee has availed /deemed. to have availed three chances within the period of two years, no further chance shall be allowed to appear in typewriting test and his/her case will be dealt as per instructions contained in Estt Rule No. 12/2017 & Estt Rule No. 287/2018 for granting exemption.

1.5 Board vide RBE No. 143/2011 (Estt Rule No. 173/2011) have clarified that in case of sports person recruited against Sports Quota as Clerk/Sr. Clerk failing to pass Typewriting test within four years from the date of appointment. then, his /her appointment will be treated as provisional till such time he/she passes the Typewriting test. No promotion/increment will be granted. However, in case of outstanding sportspersons, exemption from passing typewriting test for grant of promotion will be with the approval of the General Manager as specified in RBE No. 02/2016 (Estt Rule No. 18/2016). Person recruited against sports quota may be allowed to appear in the Type Writing test, till he/she passes the same. Hence, sports persons shall be allowed to appear typewriting test till they pass the test or they are given exemption in terms of extant instructions whichever is earlier.

1.6 Other terms and conditions issued in this regard which have not been covered may continue to apply.

2. Any malpractices during typewriting test such as copying & pasting of typed matter etc shall be viewed seriously and apart from taking suitable disciplinary action, the employee found involved in such activities shall be debarred for further chances and his case will be dealt in the same manner as prescribed in para 1.4 for granting exemption.

3. These instructions may be communicated to all candidates who join clerical posts as part of the offer/appointment letter.

4. The above conditions may also be incorporated in the notification issued for calling the employees to appear in the typewriting test.

5. The concerned cadre controlling authority i.e. Dy CPO/HQ , Sr DPOs of the Divisions and JAG or higher officer officers in workshops are the competent authority to decide the valid/genuine reason as referred above.

6. This issues with the approval of PCPO. 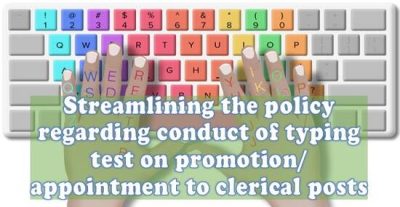