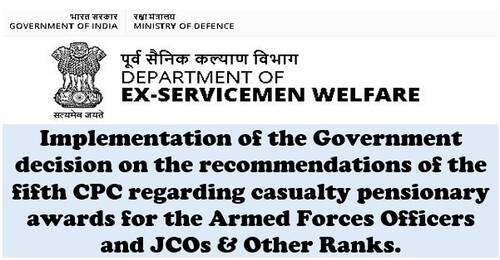 Subject: – Implementation of the Government decision on the recommendations of the fifth CPC regarding casualty pensionary awards for the Armed Forces Officers and JCOs & Other Ranks.

A copy of Govt. of India, Ministry of Defence, letter No.2(3)/2012/D(Pen/Pol)/Vol-II dated 02.09.2021 on the above subject, which is self explanatory, is forwarded herewith for further information, guidance and necessary action,

(i) Flying operation involved in rehearsing of war plans and implementation of OP instructions inclusive of international exercises.

(ii) All combat and Tactical Sorties in preparation of war.

5. Service HQrs/Records Offices concerned are advised to re-examine each such case strictly in accordance with six categories mentioned at para 2 above in consultation with PCDA without any deviations.

6. A copy of this circular along with Government of India, Ministry of Defence letter No. 2(3)/2012/D(Pen/Pol)/Vol-II dated 02.09.2021 is also available on the website of this office www.pcdapension.nic.in.

Casualty Pensionary Awards for the Armed Forces Officers and JCOs & ORs wef 01.01.1996 due to 6 categories under Battle Inoculation Training Exercises