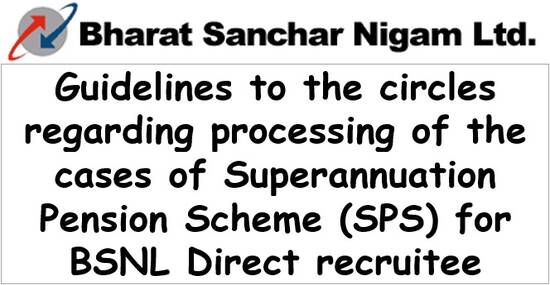 Subject: Guidelines to the circles regarding processing of the cases of Superannuation Pension Scheme (SPS) for BSNL Direct recruitee -reg.

I am directed to refer to the subject mentioned above and to say that BSNL CO has introduced Superannuation Pension Scheme (SPS) for direct recruit employee w.e.f. 05.05.2016. CA Branch of BSNL CO has issued necessary instructions from time-to-time for operation of the scheme. Of late, it has been noticed that some of the employees, who were members of the Scheme have superannuated/retired/ deceased and such employees/ their beneficiaries have become eligible for benefits under SPS.

2. In connection with processing of cases, the required forms for settlement of claims under the scheme have been finalized in consultation with the fund manager i.e. LIC of India and these are enclosed herewith. The circles/units will be required to send the duly completed forms along with requisite documents [as per list indicated in forwarding letter addressed to Sr. GM(Estt.), which is part of the forms/documents enclosed while forwarding the cases of SPS after verification of all the inputs.

2. It has been further decided that a nodal officer (SOE/ AO or above) may be designated in each circle/ unit for forwarding of SPS claims to BSNL CO. All SPS cases may be routed through nodal officer to BSNL Corporate Office. It should be the duty of nodal officer to check that all the SPS claim forms are in order and necessary documents are attached along with SPS claim forms. The circles/units will forward the hard copies of claim forms, in original along with requisite documents.to Corporate Office and also a soft copy (in PDF) at Email ID- bsnlcodrsps[at]gmail.com.

3. The SPS claim will be settled in the following manner :-

a) Employee/ beneficiary, as the case may be, will fill the SPS claim form/ papers on superannuation/ retirement/ death and submit the same to the office where the employee last attended.

c) The duly filled in SPS claim forms will be forwarded to designated Nodal officer in the Circle/ Unit. It will be the duty of nodal officer to check that the claim is in order and all necessary documents have been attached. After verification of the claim, the Circle/ Unit will forward the complete SPS claim to Estt. Branch, BSNL Corporate Office for further processing.

d) After receiving the complete SPS claim, Estt. Branch will scrutinize the claim. Incomplete claims will be returned to the concerned office. Ii the claim is in order, the claim will be forwarded to Corporate Accounts Branch, BSNL CO for verification of deposit of actual contribution in respect of concerned employee to UC. The Corporate Accounts Branch will issue a certificate to the effect that contribution has been remitted to UC along with related details in respect of the particular employee. After receipt of certificate from BSNL CA Branch, the complete case will be forwarded to LIC office for release of SPS benefits to the member/ beneficiary.

e) Once the SPS case was finally settled, BSNL will not be concerned with regard to annuity benefits. The employee/beneficiary will communicate directly the LIC with regard to dispute/ discrepancy in annuity amount.

4. Any clarification with regard to the Superannuation Pension Scheme and contribution made under the scheme will be provided by CA Branch, BSN CO.

5. Sincere efforts may also be made by the Circle/Units to intimate the eligible employees or their beneficiary, as the case may be, to submit the claim form for SPS benefit by sending SMS or contacting through telephone or any other means of communication.

This is issued with the approval of the Competent Authority. 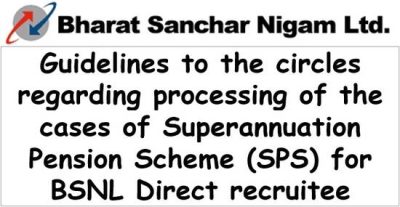