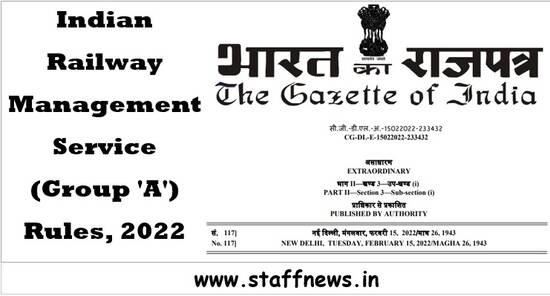 MINISTRY OF RAILWAYS
(Railway Board)
NOTIFICATION

G.S.R. 119(E).—In exercise of the powers conferred by the proviso to article 309 of the Constitution, the President hereby makes the following rules regulating the method of recruitment to the Indian Railway Management Service Group ‘A’, namely:-

(1) These rules may be called the Indian Railway Management Service (Group ‘A’) Rules, 2022.

2. Definitions.- In these rules, unless the context otherwise requires:-

a) ‘ACC’ means the Appointment Committee of the Cabinet.

h) ‘Grade’ means the Grades of duty posts specified in Column 2 of the Schedule I.

i. taken into account for the purpose of seniority in the case of those already in the grade at the time of commencement of these rules;

ii. during which an officer would have held a duty post in that grade but for being on leave or otherwise not being available for holding such post.

j) ‘level’ in the pay matrix means the level specified in third row of Part A of the Schedule to the Railway Services (Revised Pay) Rules, 2016.

k) ‘pay matrix’ means matrix specified in Part A of the Schedule to the Railway Services (Revised Pay) Rules, 2016, with levels of pay arranged in vertical cells as assigned to corresponding existing pay band and grade pay or scale.

l) ‘Schedule’ means the Schedules appended to these rules.

m) ‘Service’ means the Indian Railway Management Service, which shall consist of the posts or grades or time scales mentioned in Schedule I to these rules.

n) The expressions ‘Scheduled Castes’, ‘Scheduled Tribes’, ‘Other backward Classes’, ‘Economically Weaker Sections (EWSs)’ and ‘Persons with disabilities’ shall have the meanings respectively assigned to them in the Constitution of India or Acts of Parliament.

(1) An Organised Service known as the Indian Railway Management Service consisting of persons appointed to the Service under rule 6 shall stand constituted with the notification of these rules.

(2) All the posts included in the Service shall be classified as Group A posts.

4. Grades, Authorised Strength and its review.-

(1) The designations, levels in the pay matrix, grades, sanctioned strength, of the duty post on the date of commencement of these rules shall be as specified in Schedule I.

(2) Notwithstanding anything contained in sub-rule (1), by notification in Official Gazette, the Government may, from time to time-

a. make addition, alteration, substitution or modification to the number of duty posts, grade, designation and level in the pay matrix specified in Schedule I;

c. in consultation with the Commission, appoint an officer to a duty post included in the service under clause (b) to the appropriate grade.

5. Members of the Service.-

The following persons shall be the Members of the Service, namely:-

(2) Persons appointed to the duty posts under rule 6.

6. Future maintenance of the Service.-

(1) Any vacancy in any of the grades specified in Schedule I after the commencement of these rules shall be filled in the following manner, namely:-

(a) 50 per cent of the vacancies in the grade of Junior Time Scale shall be filled by direct recruitment through Civil Services Examination conducted by the Commission on the basis of the educational qualifications and age-limit specified by the Government in consultation with the Commission.

(b) 50 per cent of the vacancies in the Junior Time Scale shall be filled by promotion through selection, in the manner specified in Schedule II.

(2) The appointment in the grade of Junior Time Scale shall be made in consultation with the Commission.

(3) The appointment in the grades of Senior Time Scale and above of the Service shall be made by promotion from amongst the officers in the next lower grade possessing minimum qualifying service and in the manner as specified in Schedule II.

(4) The selection of officers for promotion shall be made by selection except in the case of promotion to post of Non Functional Selection Grade which shall be on the basis of seniority subject to suitability on the recommendation of the committee constituted for this purpose in accordance with Schedule-III.

(5) The selection in each case under sub-rule 3 shall be on the recommendation of the Departmental Promotion Committee except in case of post in Apex, HAG+ and HAG. Selection in these cases shall be governed by Railway Board Resolution regarding norms for selection of officers for appointment to these posts, issued from time to time with the approval of the Appointments Committee of the Cabinet.

(1) The seniority of persons appointed to various grades of the Service and inter seniority between the direct recruits in the grade of Junior Time Scale and the officers promoted to Junior Time Scale on and from the date of commencement of these rules shall be determined in accordance with the general orders or instructions on seniority issued by the Government or Controlling Authority from time to time.

(2) For the cases not covered under sub rule (1) of rule 7, the seniority shall be determined by the Controlling Authority in consultation with the Department of Personnel and Training or Union Public Service Commission.

8. Deputation to other departments or organizations.-

9. Liability for service in any part of India.-

The officers appointed to the Service shall be liable to serve anywhere in India or outside.

(1) Every officer on appointment to the Service, either by direct recruitment or by promotion in Junior Time Scale, shall be on probation for a period of two years:

Provided that the Controlling Authority may extend the period of probation in accordance with the orders and instructions issued by the Government from time to time.
Provided further that any decision for any extension of period of probation shall be taken ordinarily within eight weeks after expiry of the previous period of probation and communicated in writing to the concerned officer together with the reasons for so doing within the said period.

(2) On completion of the period of probation or an extension thereof, officers shall, if considered fit for the permanent appointment, be retained in their appointment on regular basis and be confirmed in due course against the available substantive vacancy, as the case may be.

(4) During the period of probation or any extension thereof, the officers may be required to undergo such training and instructions and to pass such examination and tests (including examination in Hindi) as Government may deem fit, as a condition to satisfactory completion of probation.

(5) In all matters not specifically provided for herein, the probationers will be governed by the provisions of the Indian Railway Establishment Codes or Manuals as amended from time to time and other orders in force issued by the Controlling Authority from time to time.

(3) Grant of Non-Functional Up-gradation shall be made on the recommendations of the Departmental Screening Committee as specified in Schedule III.

(4) The terms and conditions for grant of Non-Functional Up-gradation shall be as per the instructions or orders issued by the Government on the subject from time to time.

12. Other Conditions of Service.-

The conditions of service of the members of the Service, in respect of matters for which no provision is made in these rules shall, unless the Government otherwise orders, be the same as are applicable from time to time to officers of the Organized Group “A” Central Service.

(a) who has entered into or contracted a marriage with a person having a spouse living, or

(b) who having a spouse living has entered into or contracted marriage with any other person,
shall be eligible for appointment to the service.

Provided that the Controlling Authority may, if satisfied that such marriage is permissible under the personal law applicable to such person and the other party to the marriage and that there are other grounds for doing so, exempt any person from the operation of this rule.

14. Regulation of Pay, Leave and Pension.-

The pay, increments, leave, pension and other conditions of service of officers of the various grades shall be regulated in accordance with the Indian Railway Establishment Code Volume I and Volume II and Indian Railway Establishment Manual or other relevant instructions in force from time to time issued by the Government or Controlling Authority.

Where the Controlling Authority is of the opinion that it is necessary or expedient to do so, it may by order for reasons to be recorded in writing and in consultation with the Commission, relax any of the provisions of these rules with respect to any class or category of persons.

Nothing in these rules shall affect reservations, relaxation of age-limit and other concessions required to be provided to the Scheduled Castes, the Scheduled Tribes, Other Backward Classes, Economically Weaker Sections, Persons with disabilities, Ex-Servicemen and other special categories of persons in accordance with the orders or instructions issued by the Government from time to time in this regard.

If any question relating to interpretation of these rules arises, it shall be decided by the Controlling Authority in consultation with the Commission.

The grades, designations, number of sanctioned posts and level in the pay matrix of duty posts included in the Indian Railway Management Service

*Subject to variation dependent on workload.

@ Subject to new designations being introduced based on nature of work. # (a) There is no increase in overall strength of the Cadre.

(b) The no. of posts to be operated in Non Functional Selection Grade shall not exceed the total no. of  sanctioned posts in Junior Administrative Grade.

Method of appointment, field of selection and the minimum qualifying service for promotion to the higher duty posts(s) or Grade(s) of the Indian Railway Management Service.

Loading...
Newer Post
Calculation of Income Tax on Interest of GPF on contribution above Rs. 5 Lakhs
Older Post
List of Sanctioned & Rejected cases for grant of Central Samman Pension for the month of March to August, 2021