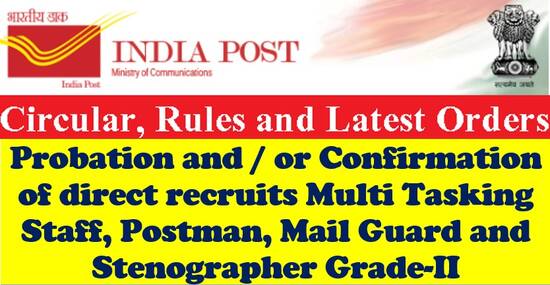 F.No.W-17/31/2021-SPN-I-DOP
Government of India
Ministry of Communications
Department of Posts

3. Currently direct recruits PAs/SAs officials undergo institutional / induction training at the Postal Training Centres (PTCs)/ Regional Training Centres (RTCs) where they have to obtain minimum marks as prescribed by Training Division, in the tests for successful completion of mandatory training, which is pre-requisite for confirmation.

4. In line with the above, following instructions shall be taken into account for successfully completion of probation and / or confirmation in case of direct recruits MTS, Postman, Mail Guard and Stenographer Grade-II: –

(b) If any probationary direct recruit official is unable to clear the tests held at the PTCs/RTCs in his/her first attempt, he/she may be given two more additional chances to pass the tests. These three chances (including first chance during training) may be provided within the two-year mandatory probation period. Such officials should not be posted to any sensitive post during this period.

(c) Before the third chance is given to an official, who has failed in first two attempts, he/she should be given a written warning to the effect that his/her failure in mandatory tests does not justify his/her confirmation in the service and that, unless he/she shows substantial improvement within a specified period and clears the test, the issue of terminating him/her from service shall be considered.

(d) If any official is still unable to clear the tests in three attempts within two years’ probation period, the probation period in his/her case will be extended by six months during which time he/she shall have to mandatorily pass the tests. For such officials, whose probation period has been extended by six months due to failure to pass the tests, a qualifying test will also be introduced which will be in addition to the existing tests.  The modalities of such qualifying test will be as finalized by Training Division of the Postal Directorate.

(e) In case the official passes required tests and has also acted/performed satisfactorily during the entire period of probation including extension also, he/she shall be declared to have successfully completed probation period and shall be confirmed in service by the Departmental Confirmation Committee (DCC).

(f) If any official fails in the tests and/or does not pass the qualifying test, the services of such temporary direct recruit official shall be terminated. 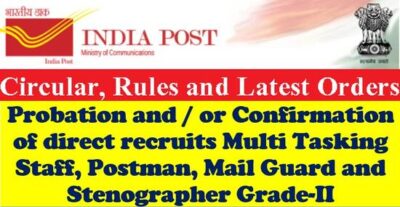