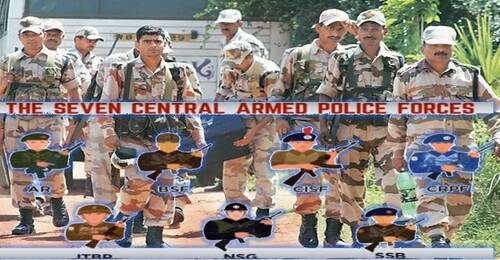 VACANCIES IN PARAMILITARY AND POLICE FORCES

1653. DR. V. SIVADASAN:
Will the Minister of HOME AFFAIRS be pleased to state:

(a) how many posts are lying vacant in Paramilitary forces and Police forces in Union Territories, the category-wise details thereof;

(b) the reasons for vacancies;

(c) the number of recruitments which happened in these forces during the last five years, the year-wise, category-wise details thereof; and

(d) by when does Government intend to fill these vacancies?

(a): As per the information available, category-wise details of posts lying vacant in Central Armed Police Forces (CAPFs), Assam Rifles (AR) and Police forces in Union Territories are given in the table below:

(c): Details of recruitments made during the last five years, the year- wise, category-wise are as under :

(d): Vacancies are filled by various methods of recruitment such as direct recruitment, promotion, deputation, etc. as per the provisions of the respective Recruitment Rules. Requisite measures are being taken to fill up the vacancies as and when arise through various agencies such as Union Public Service Commission (UPSC) and Staff Selection Commission (SSC) as well as by holding Recruitment rallies, conducting Departmental Examinations, etc. Filling up of vacancies is an ongoing continuous process and efforts are made to fill up vacancies expeditiously through the relevant recruitment methods.