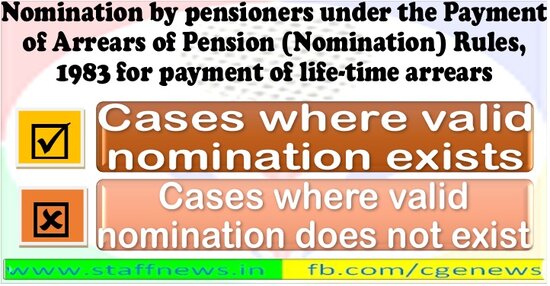 Payment of Arrears (Nomination) Rules, 1983 for payment of life-time arrears: DoP&PW OM 06.04.2022 regarding availability of Nomination

Payment of Arrears (Nomination) Rules, 1983 for payment of life-time arrears: DoPP&W OM 06.04.2022 regarding availability of Nomination 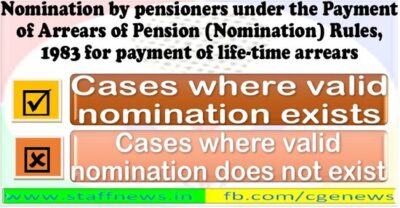 Subject: Nomination by pensioners under the Payment of Arrears of Pension (Nomination) Rules, 1983 for payment of life-time arrears.

In continuation of DoP&PW Letter of even number dated 31.03.2022, the undersigned is directed to enclose a copy of Notification No GSR-235 dated 28.03.2014 wherein Form-A has been prescribed for Nomination by a pensioner for life time arrears. This Form is to be used for submission of nomination to Head of Office as well as Bank. Therefore, Form-B which was being used for submission of nomination/modification to the Bank before 28.03.2014 no longer exists.

2. References/representations have been received in this Department mentioning that Pension of deceased pensioners 1s not often revised based on recommendation of Pay Commission etc and arrears of pension in respect of deceased pensioner are not paid by the Pension Disbursing Bank to the nominee. It is clarified that revised pension payment authority is required to be issued in respect of all pensioners/family pensioners who were alive as on 01.01.2016 and lifetime arrears is required to be paid to the families of such pensioners/family pensioners who died after 01.01.2016.

3. Payment of Arrears in respect of deceased pensioner, 1n whose case; a valid nomination exists with the Pension Disbursing Authority/Bank. In this connection, attention 1s invited to para 21.5.1 of the new Scheme Booklet, (5 Edition, July 2021) which is reproduced below:-

The CPPC will enter the date of death of the pensioner in the disburser’s portion of the PPO and will retain this information on its database with suitable audit trail and in the register maintained in their software in the form as Annexure-IX. An entry for date of death of the pensioner will be made in pensioner’s half by PAHB. The pensioner’s half of PPO will then be returned to the nominee if family pension stands authorised through the same PPO; otherwise it will be returned by CPPC to CPAO along with the disburser’s half. The CPAO will up-date its record and transmit both halves of the PPO after keeping necessary note in their records to the PAO/AG who had issued the PPO for similar action and record. For payment of arrears to the nominee, he/she will be asked to apply for the same to the PAHB along with the pensioner’s half of the PPO showing the period of arrears. The PAHB, after verifying the fact that the payment is actually due to the deceased pensioner, and also the particulars of the nominee as given in the nomination, will intimate the CPPC along with pensioners portion of PPO for making payment by crediting the account of the claimant. The provision of this rule will apply mutatis mutandis to cases where the family pension ceases to be payable either due to death of the family pensioner, his/her remarriage/marriage or on the pensioner attaining the maximum age prescribed in the rules.

In the absence of any nomination made by the pensioner, the arrear of his/her pension are paid as per procedure prescribed in the Government of India, Ministry of PPG & Pensions, Department of Pension & Pensioners Welfare New Delhi OM No. 1/22/2012-P&PW (E) dated 10.07.2013.

4 The above instructions may be circulated widely for strict compliance by all concerned.

(Sanjoy Shankar)
Deputy Secretary to the Government of India
Ph-24635979