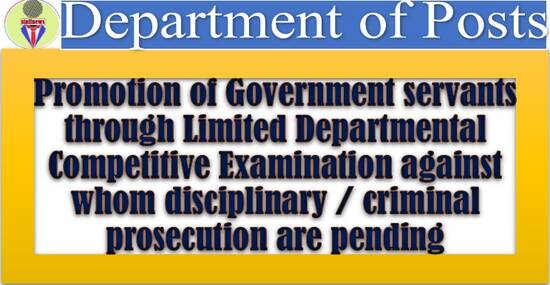 No. X-7/6/2022-SPN-II
Government of India
Ministry of Communications
Department of Posts
(Personnel Division)

I am directed to refer to D.G. P&T Letter no. 7/31/63-SPB-II dated 25.06.1965 pertaining to instructions dealing with allowing officials to appear in Departmental Examination against whom departmental proceedings / criminal prosecution are pending.

2. The above mentioned provision related to Departmental Examination have been reviewed in consultation with Department of Personnel and Training (DoPT). It has been decided that instructions related to promotion of Government servant through DPC against whom disciplinary case / criminal prosecution is pending, as issued vide DoPT O.M. No. 22011/4/91-Estt.(A) dated 14.09.1992, amended from time to time shall be applicable mutatis mutandis in case of promotion through Limited Departmental Competitive Examination (LDCE) also.

3. In view of the above, following instructions related to LDCE are issued:

(i) Government servants applying for LDCE and falling under the following categories shall be allowed to appear in examination on ‘Provisional’ basis only:

(ii) Crucial date for determining candidature of an official for LDCE on aboveparameter shall be closing date of application for relevant LDCE.

(iii) Before declaring result of LDCE, authority concerned shall obtain Vigilance clearance in respect of all candidates. Result of candidate(s) who fall in any one of the above three categories mentioned at (i) above, shall not be declared and will be kept in sealed cover.

(v). Before relieving an official on promotion, authority concerned shall ensure that there is no case against the official, which falls under any one of the categories at (i) ebove. If any such case arises, official shall not be relieved for promotion, and his / her case shall be deemed to have been kept in sealed cover.

(vi) On conclusion of disciplinary case / criminal prosecution which results in complete exoneration or dropping of allegations / charges levelled against the Govt. servant or the Govt. servant is not found guilty, the sealed cover(s) shall be opened. The due date for promotion will be determined with reference to the position assigned to him in the result of LDCE kept in the sealed cover(s) and with reference to the date of promotion of his next junior on the basis of such position.

(vii) If any penalty is imposed on the Govt. servant as a result of the disciplinary proceedings or if he is found guilty in the criminal prosecution against him, sealed cover(s) shall not be acted upon.

(viii) These instructions shall not apply in the cases(s) where partial results have already been declared. Partial. declaration of result(s) will mean the cases where result of some of the candidates or one / more paper(s) have been declared. 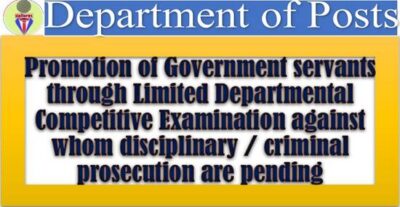