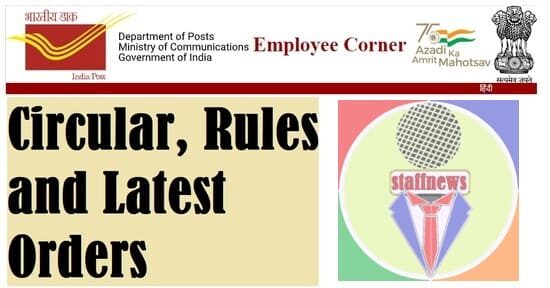 No. Q-25/39/2022-PE-I-DOP
Government of India
Ministry of Communications
Department of Posts
(PE-I Section)

All Heads of Circles,

Subject: Powers for redeployment of Group B (Gazetted and Non-Gazetted) posts.

Kindly refer to this office letter no. 2-2/93-PE-I dated 07.09.1993, vide which powers for redeployment of Group ‘C’ & ‘D’ posts were delegated to the Chief Postmasters General (in consultation with Circle IFA) and for re-deployment of Group ‘A’ & ‘B’ posts, were vested in the Postal Services Board (PSB) with concurrence of FA (Posts), in pursuance of Ministry of Finance, Department of Expenditure, U. O. No. 2246-E-Coord/93 dated 05.08.1993

3. Over the years, the scenario has completely changed, thus, it has been decided, with the approval of Postal Services Board (PSB), that henceforth redeployment of all Group B posts (Gazetted and Non-Gazetted) may also be done by the Heads of Circles (with the concurrence of CIFA) in addition of Group C and D (now Group C) posts.

4. The Circles must subsequently submit the details of all such redeployments of Group B posts (Gazetted and non-Gazetted) for information of the PSB on quarterly basis before 10th of subsequent month of the quarter i.e. before 10th of January, 10th April, 10th July and 10th October.

5. Proposals for redeployment of Group ‘A’ posts shall be referred to this Directorate with the concurrence of the Circle IFA and the approval of the concerned Chief Postmaster General.